Doctor Who "A Big Hand for The Doctor" eBook Review 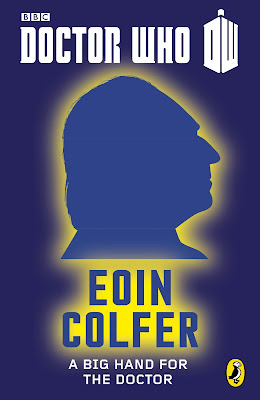 Doctor Who:
A Big Hand For The Doctor
By Eoin Colfer

The first of 11 Doctor Who eBooks to celebrate the 50th anniversary of Doctor Who has been released. The story centers on the 1st Doctor and Susan before they met Ian and Barbara.   It takes place in 1900 London where The Doctor is looking to get a new hand. His old hand was chopped off by a Soul Pirate.  Apparently and old acquaintance of his has set up a shop and he specializes in attaching cloned body parts or other types of parts like an exoskeleton hand.   Then he gets a message from Susan that the Soul Pirates are up to no good and that he needs to hurry up and meet her. Well that is when the adventure begins.

A Big Hand for The Doctor was written by Eoin Colfer who is famous for his Artemis fowl series of young adult novels.  Since these eBooks are aimed at a younger audience having a young adult author write them is a pretty good idea as it won’t be bogged down with a lot of science fiction jargon or a complicated plot.  With that said Eoin Colfer does give us a very enjoyable story that is pretty easy to follow and is pretty easy to read.  He captured the feel of William Hartnell’s Doctor very well and I could see this fitting into that particular era.  Only thing is I wished it was a tad bit longer as I thought it was to short.  But since this is a series of stories that will be released in one volume later this year I can see why it was the length it was.

The only thing I had a problem with is the whole hand thing.  I just didn’t like that idea but knew why it was done, you will too once you get to the last chapter, but I still didn’t care for it.  It just didn’t seem right and not something that would have happened to The Doctor.  But in all A Big Hand For The Doctor was an enjoyable read and a fun one to read before bed or during a lazy afternoon.
Grade B+

Email ThisBlogThis!Share to TwitterShare to FacebookShare to Pinterest
Labels: 1st Doctor, A Big Hand For The Doctor, doctor who, Doctor Who 50th Anniversary, eBook, Eoin Colfer