Doctor Who 50th Anniversary: The Romans 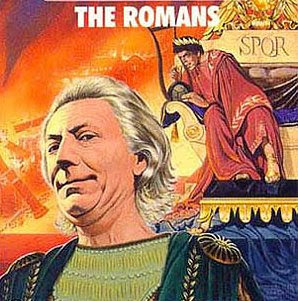 Doctor Who:
The Romans
By Dennis Spooner

“You know, I am so constantly outwitting the opposition I tend to forget the delights and satisfaction of the gentle art of fisticuffs.” 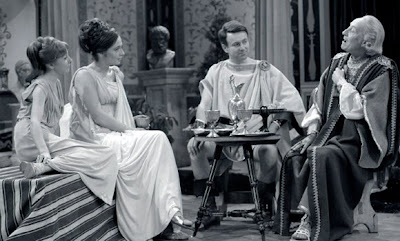 The Romans is not your usual Doctor Who story. Besides the fact that it is pretty funny it also was one of the few stories where there were two stories going on at once.  First you have The Doctor and Vicki en route to Rome when they come across a body. In fact it’s the body of Maximus Pettulian.  The Doctor picks up the lyre just as a centurion arrives and mistakes The Doctor as the famous lyre player.   So they are whisked away to Rome where an audience with Emperor Nero awaits them.

That’s where all the comedy starts.  As the Doctor plays Nero for a fool.  But impersonating Maximus Pettulian doesn’t come without its risk as assassins are still a foot to kill the Doctor now.  You see they think they failed in their attempt to kill Maximus Pettulian and well I think you can figure out what happens next.  In fact there is a really good action scene in which The Doctor defends himself against the assassins by using the lyre.  So you see the 1st Doctor can also be a man of action.

The second story involves Ian and Barbara getting kidnapped by slave traders Ian gets sold to one slave trader who has him rowing a boat in the Mediterranean while Barbara gets sold to Tavius who works in the court of Nero.  While a decent man he does warn Barbara that if she tries to escape she will be killed.  This second part is truly good as it shows Ian to be the man of action.  In fact this is probably the best performance by William Russell in Doctor Who.  Ian goes through so much to try and save Barbara that you start to believe that there is something more than friendship between the two school teachers. 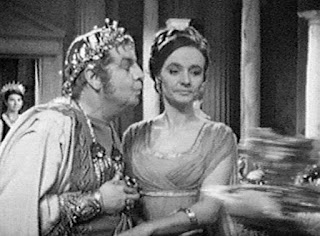 But the true comedic gem of this story is Emperor Nero himself. Derek Francis puts in an excellent performance as Nero.  He is funny and can turn dead serious at times that makes you wonder if Nero was truly like how they portrayed him.  A truly good performance and one that is pretty funny at that. Good to see they didn't take everything so seriously back then all the time. 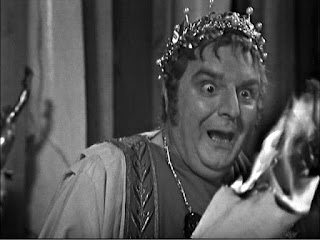 It is true that most historical Doctor Who stories are boring and dry at times but The Romans is the exception.  It is funny, and action filled and is full of great moments that makes this story a must see for Doctor Who fans. Plus it is great how Nero gets the idea of how to burn Rome to the ground.  The Romans is truly one of the best historical Doctor Who stories of all time and one of the best William Hartnell stories as well mainly because William Hartnell performance was as the Ninth Doctor says “Fantastic”.
Grade A