Doctor Who Magazine 494 Cover and Details 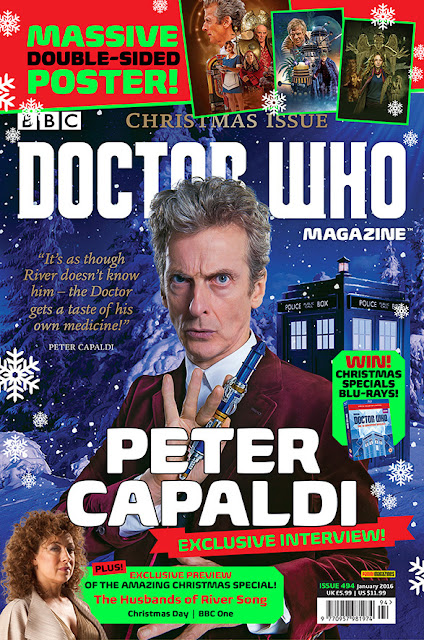 Out today is the Christmas Bumper issue of Doctor Who Magazine issue 494 and it comes with a poster.  Below is the details of this months issue which also has an interview with Peter Capaldi.

Doctor Who Magazine takes a look forward to this year’s Doctor Who Christmas Special – The Husbands of River Song – and also features an exclusive interview with the Doctor himself, Peter Capaldi…

We asked Peter how is the Doctor going to cope with meeting River Song again?

“There’s a very different dynamic,” Peter replies. “As you’ll see, she doesn’t know it’s him at first. She can’t be convinced that it is, so she’s sort of not interested in him! He gets a taste of his own medicine, from her. She treats him very coldly, and flirts with a lot of other people in front of him. He doesn’t get any flirting, which I think upsets him. Eventually – finally! – she recognises him. But then another element comes into play and… well, you’ll have to wait and see. But it’s fun…”

GOOD KING HYDROFLAX?
We chat to Inbetweeners star Greg Davis about his upcoming role as King Hydroflax – husband to River Song – in this year’s Doctor Who Christmas Special.

CHRISTMAS IS COMING
In her column Relative Dimensions, Jacqueline Rayner wonders if question-mark underpants will be available in time for Christmas.

HEAVEN & HELL
DWM goes behind the scenes of this year’s final two episodes, Heaven Sent and Hell Bent, and chats to director Rachel Talalay about how she went about bringing back Gallifrey.

RASSILON RETURNS
Actor Donald Sumpter, who previously appeared in 1968’s The Wheel in Space and 1972’s The Sea Devils, chats about meeting his third Doctor, and about his appearance as Rassilon in the recent Hell Bent.

DWM’S REVIEW OF 2015
DWM travels back in time to January to relive the Doctor Who highlights of this year.

CLARA’S KILLER!
One of the people responsible for Clara’s death ­– Sarah Dollard, writer of Face the Raven – explains her actions!

THE DWM REVIEW
DWM reviews the final four episodes of the latest series: Sleep No More, Face the Raven, Heaven Sent and Hell Bent, as well as revisiting the Doctor’s first Christmas Day appearance in 1965’s The Feast of Steven. We also take a look at the latest books and audio and Doctor Who gifts which make perfect stocking fillers.

COMING SOON
All the latest Doctor Who merchandise releases, including the much-anticipated War Doctor audio dramas from Big Finish, Only the Monstrous.

PLUS! All the latest official news, competitions, The Watcher’s Fiendishly Festive Christmas Quiz, The DWM Christmas Crossword and a massive double-sided poster! 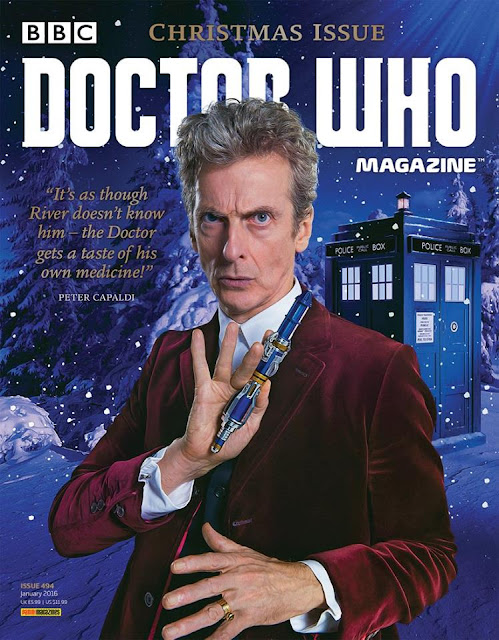 Email ThisBlogThis!Share to TwitterShare to FacebookShare to Pinterest
Labels: doctor who, Doctor Who Magazine 494, Peter Capaldi