Doctor Who - Synopsis For All - Consuming Fire 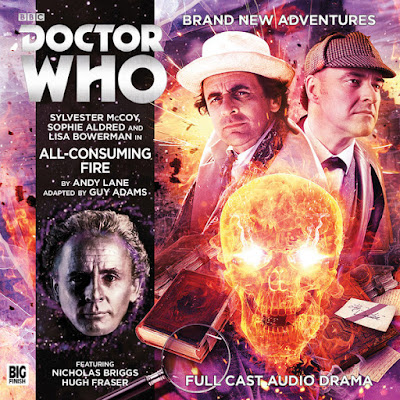 It's not the Sherlock Holmes and Doctor Who team up that fans have wanted but Big Finish has given us one that is just as good. Based on the Virgin Book that came out in 1994 this audio see the 7th Doctor, Ace and Benny meeting Holmes and Watson.  Out now by Big Finish and available at their website.
http://www.bigfinish.com/releases/v/all-consuming-fire-1229

The Library of St. John the Beheaded contains the most dangerous books in all creation so when some of them are stolen who else should the Vatican call but Sherlock Holmes?

Immediately, one of the possible suspects seems more suspicious than others. He has no traceable background, refuses to give straight answers and hides behind a pseudonym. However, Holmes and his loyal friend Watson soon realise this suspect is also their greatest hope: war is brewing and an Old God is rising, to save humanity they need The Doctor as much as he needs them.

Based on the original 1994 New Adventures novel by Andy Lane.

Other parts played by the cast.
Posted by DR5WHO at 10:57 AM