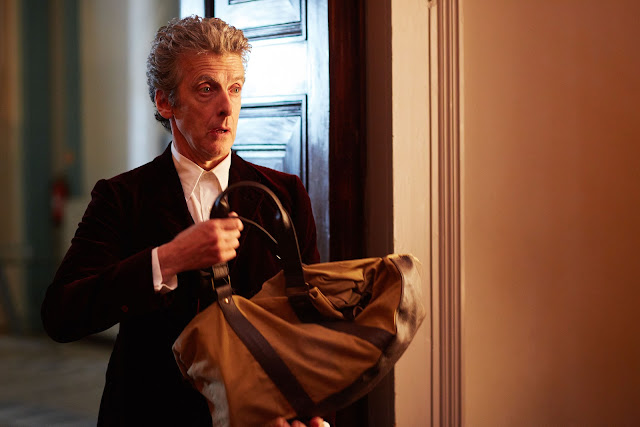 We have three interviews from the BBC Media Centre for the 2015 Doctor Who Christmas Special The Husbands of River Song.  Today is The Doctor himself Peter Capaldi

What can you tell us about the Doctor Who Christmas special this year?
Well the Christmas special is very Christmassy, which I’m sure everyone will be relieved to hear. It finds the Doctor in a Dickensian kind of world, in a Christmas card sort of world which he’s been brought to in order to do a favour for a king. So there’s quite a festive spirit to the episode. But the favour is more complex and isn’t exclusively for the benefit of the king, but more for the benefit of the king’s consort.

What is your favourite scene from this episode?

I have lots of favourite scenes from the Christmas episode, but I think being met by Matt Lucas on a wonderful wintery Dickensian street with the TARDIS covered in snow was delightful, because it was like a Doctor Who Christmas card. Matt is such a fabulously funny person to have around, so I loved that!

Do you like filming Christmas episodes?
Yes I do like them - last year’s was a bit scarier than this one, this is more openly festive. I like the idea of ghost stories at Christmas and frightening things seem to work rather well in the festive environment.

Would you like to see River Song return?
Yes of course, because Alex is fabulous and it’s always lovely to work with her.

Who is Nardole?
The character of Nardole is played by Matt Lucas so you can expect a lot of laughs and pathos. He is, as ever, a hugely loveable personality, a little naïve, a little out of his depth and quite cosmic.
Posted by DR5WHO at 7:30 AM

Email ThisBlogThis!Share to TwitterShare to FacebookShare to Pinterest
Labels: 2015 Christmas Special, doctor who, Peter Capaldi, The Husbands of River Song