Doctor Who - The Deadly Assassin Review 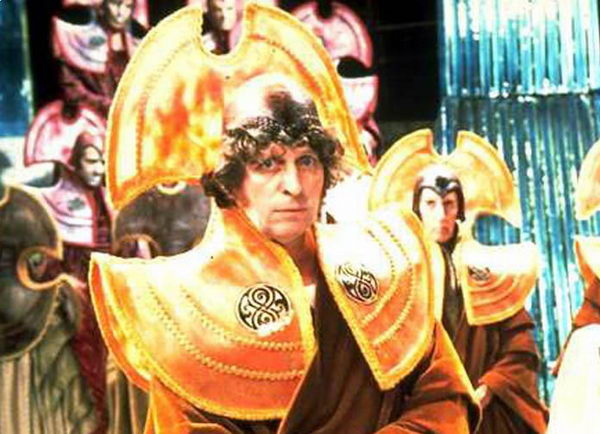 Doctor Who:
The Deadly Assassin
By Robert Holmes

“Through the millennia, the Time Lords of Gallifrey led a life of peace and ordered calm, protected from all threats from lesser civilizations by their great power.
But this was to change. Suddenly and terribly, the Time Lords faced the most dangerous crisis in their long history ...”

The Doctor has returned to Gallifrey and he doesn’t get the welcome he was expecting.  First the TARDIS is surrounded by the Chancellor guard and they are awaiting the key to break in.  The Doctor gives them the slip and proceeds to head to the capitol when he is caught by a guard.  A man in the shadows helps The Doctor out by shooting the guard allowing The Doctor to escape and make the guards think he is in the tower all the while The Doctor sneaks back to his TARDIS. 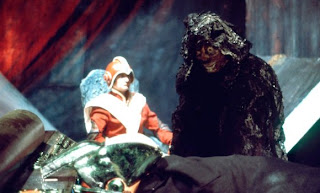 The Doctor is determined to prevent the assignation of the outgoing Lord President that The Doctor saw the premonition of.  He heads for The Panoptican and to no avail he fails and is the prime suspect because he is holding the gun that might have killed The Lord President.  During his trial The Doctor declares article 17 and announces his intentions to run for Lord President.  This act gives The Doctor 48 more hours to live as it was a foregone conclusion that Chancellor Goth was going to have him executed.

During the investigation The Doctor and Castellan Spandrell are finding more clues that help The Doctor case and when Runcible who was sent to get the video disk screams in horror.  The Doctor sees a calling card from an old enemy and all of a sudden it all makes sense.  Spandrell hopes Gallifrey isn’t the place for a long time feud to continue but The Doctor tells him it is too late and they need to stop The Master from extracting revenge on The Doctor and all of Gallifrey. 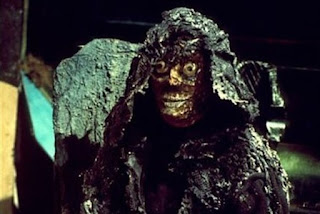 The Deadly Assassin heralds the return of The Master after a long absence from the show and they get around the Roger Delgado issue by making The Master a decrypted and dying Master at the end of his life cycle.  The Master is out of regenerations and his body is all deformed and skeletal looking and this actually works as it shows how desperate a man he is. Plus it is a scary image you have of him as The Masters face look like a skull for the most part and I thought that was pretty cool.  The Deadly Assassin also set the ground work for The Masters return as they gave him a new start as the skull Master and we see at the end him leaving Gallifrey in his TARDIS to wreak havoc on the Universe.

The Deadly Assassin is the only classic Doctor Who story where The Doctor doesn’t have an assistant.  Tom Baker thought he could  hold the show on his own so they tried it with this story but in the end The Doctor always needs a companion.  It would be quite a time before we have The Doctor traveling without a companion again. 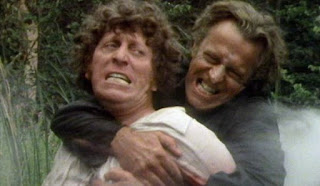 I enjoyed The Deadly Assassin because it was different.  I thought it was well down without the companion and felt the story was stronger without a companion getting in trouble as The Doctor was able to get on with what he needed to do without being hampered by a companion getting caught or asking a lot of useless questions.  But it didn’t have the charm of the companion but for one story it works.

I liked how the whole story looked and felt as it had a heavy gothic feel to it.  Just look at the sets of Gallifrey and even The Master as they all were dripping gothic.  It was fun to see more of a background of The Time Lords and get to see Gallifrey and how incredible pompous they all are.  Just look how the first Borusa acted. Very arrogant and pompous just like how The Doctor always describes them. 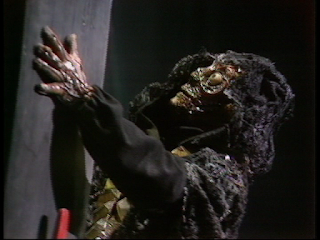 One of the reasons I like The Deadly Assassin is the episodes that The Doctor was fighting Goth in the Matrix.  It was really neat watching them battle it out in a forest like quarry filled with traps.  I found this part of the story to be really well done even if they got in a lot of trouble with it.  The Deadly Assassin got in trouble for its violence most notably when Goth was choking The Doctor underwater.  The infamous Mary Whitehouse went ballistic on that and made Doctor Who her own personal campaign against violence on TV.

The Deadly Assassin is another of those wonderful stories by Robert Holmes and you can see why he is the premiere writer for the classic series along with Terrance Dicks.  Sure The Deadly Assassin isn’t a perfect story as it does suffer from being boring in parts but it is one that is pretty good and a really interesting duel between two enemies who know each other really well.
Grade B