Doctor Who - Out Today In The UK "Doctor Who Comic" 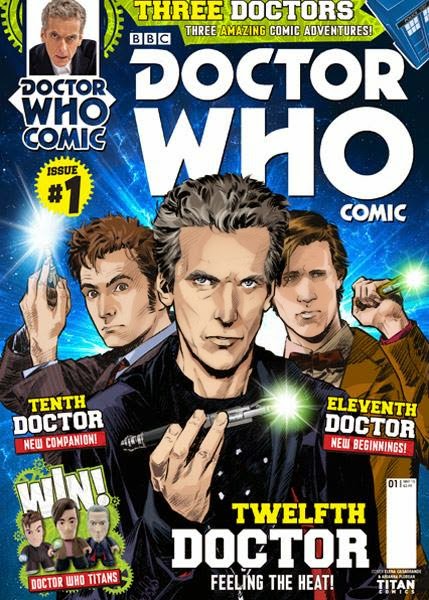 Out today in the UK is a collection of the USA Doctor Who Comic in a nice little collection where you get the first story arcs for the 10th,11th and 12th Doctor Comic Book series.  If you haven't been reading them here is your chance to read what has been so far a really good comic book series. Plus if you subsribe you can get a free t - shirt. (UK Only)

Below is a synopsis of the three stories that will be in the new Doctor Who Comic that is 84 pages at
goes for 3.99 pounds.

The Tenth Doctor
Join the Tenth Doctor as he deals with the aftermath of Donna Noble’s heart-breaking farewell. The Doctor feels he may never again have another companion, but maybe an adventure with some psychic aliens, a New York laundrette operator and the Mexican Day of the Dead festival can help change his mind!

The Eleventh Doctor
Then, while Amy and Rory are away, the Eleventh Doctor will play! Experience a time-twisting adventure as he hurtles down a collision course into a terrifying cosmic threat. Can the Doctor save the day once more with a grieving young woman, a 70s’ musician, and an amnesiac alien? Find out in this issue!

The Twelfth Doctor
Finally, Peter Capaldi’s Twelfth Doctor and Clara Oswald set off on a brand new adventure in the TARDIS! The Doctor is off to his most challenging destination yet. Whether he’s battling a fearsome, millennia-old entity on a freshly-terraformed planet or fighting the forces of an ancient alien, expect shocks, surprises and time-shaking revelations.

Extras
Every issue comes with an original humour strip
Competitions: in Issue #1readers can win a set of the Tenth, Eleventh and Twelfth Doctor Vinyl figures.
Exclusives: the first issue will also feature an EXCLUSIVE CODE to download comic strip characters into the ever-more-popular Doctor Who Legacy free-to-play game, completely FREE of charge!