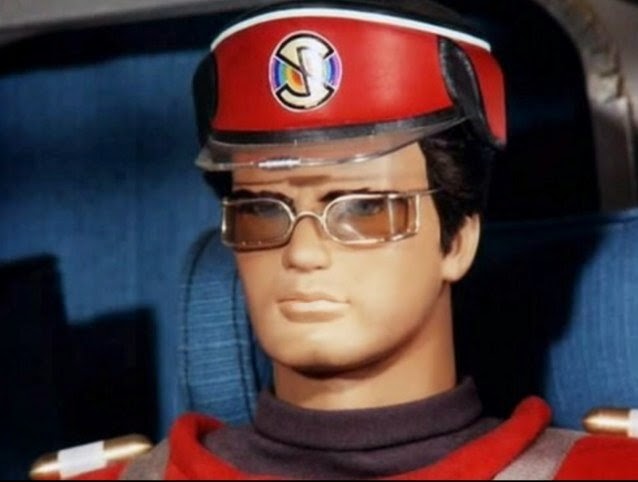 Welcome to the first of an ongoing series of articles that will include many of the happenings in the worlds of Gerry, Sylvia and Jamie Anderson. The mastermind behind such shows as Supercar, Stingray, Thunderbirds, UFO, Space:1999 and Captain Scarlet, Gerry Anderson, is gone but certainly not forgotten. There is a ton of news related to his shows and the ongoing work of his son, Jamie. So let's start with some news. 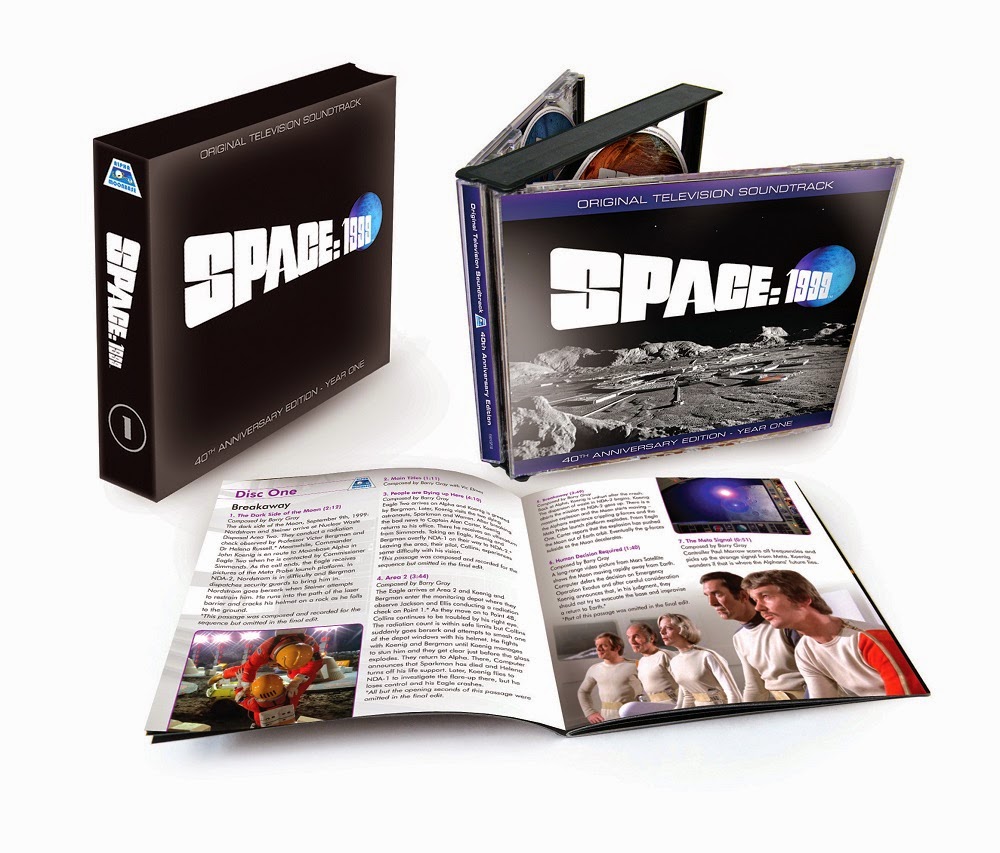 The win was over such composers as Howard Shore, Tim Phillips and Alan Silvestri. The 3-CD set, A Fanderson exclusive, includes music by Barry Gray and others from the 1975 TV series, Space: 1999 which was produced by Gerry and Sylvia Anderson.

The CD set is absolutely beautiful in both its presentation and sound quality. The music seems to include all the incidental music from the first season as well as some rarities and unused pieces. The set is only available through the Gerry/Sylvia Anderson fan club.

I highly recommend this CD but know that it is a very expensive investment as you need to be a member of Fanderson and buy the limited edition set. This set is not the only soundtrack in their catalog. They have other Anderson related sets including Supercar, Secret Service, UFO, Stingray and Terrahawks. They are also working on a huge Thunderbirds 4 disc set for later this year. All of their soundtracks are of high quality. 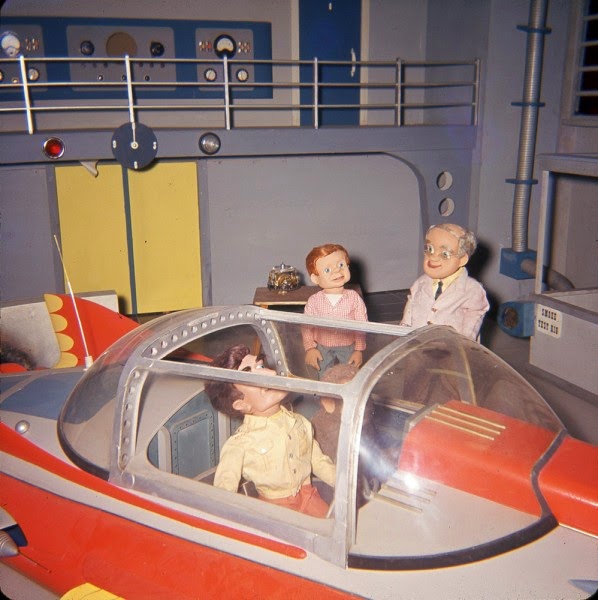 Archival Photos From Supercar and Stingray Found – A pretty cool set of photos taken of a store display from the 60's is available. The displays were actual puppets on loan by APF Studios, the company responsible for the early Supermarionation series.

Lost Worlds of Gerry Anderson DVD – Anderson Entertainment and Network are releasing a special DVD that will include some of the rarer Gerry Anderson productions including Space Police, The Day After Tomorrow and The Investigator. There will also be a lost Dick Spanner episode, a documentary by A.P. Films and the first thing Gerry Anderson ever directed, an episode of You've Never Seen This. This is right, many of these have never been seen. 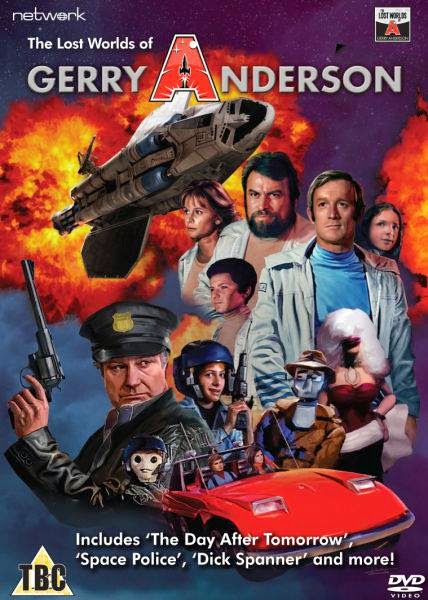 And that is just the first disc. The second one includes lots of rushes, trailers and galleries. The set is to be released at the end of March and will be available in the UK.

Much of this material was, at one point, available to Fanderson members. The Day After Tomorrow, also called Into Infinity was a pilot created in between the two season of Space: 1999 and featured Nick Tate (Alan Carter in Space: 1999) and Brian Blessed (Space:1999, Flash Gordon) and was about a ship exploring space. It originally aired in America in the 70's as an After School Special. I love this pilot and wished it made it to series.

Space Police is an interesting mixture of live action, puppets and even stop motion that is more of a curiosity than a quality production. Still, it set the stage for the series Space Precinct and is enjoyable.

Dick Spanner is a stop motion series that is as crazy as it gets. Short episodes made up several stories with a pun creating robot named Dick Spanner. Very unusual. I have no idea what the lost episode is about.

The Investigator is the pilot I always bring up when people criticize me of liking all of Gerry Anderson's productions. I bring up Investigator and tell them never to seek it out. It is about two kids shrunk down and fighting crime. The two kids have a suped up car that could easily be run over or stepped on and, oh, yea, they are Supermarionation puppets while everyone else is live action. Very odd and very poor.

I will probably buy this set – more than likely it is PAL so it won't work in the US unless you have a region free player – who doesn't?

My biggest concern is I was hoping for a blu-ray release of at least The Day After Tomorrow and since I have many of these already, I might hesitate...slightly. 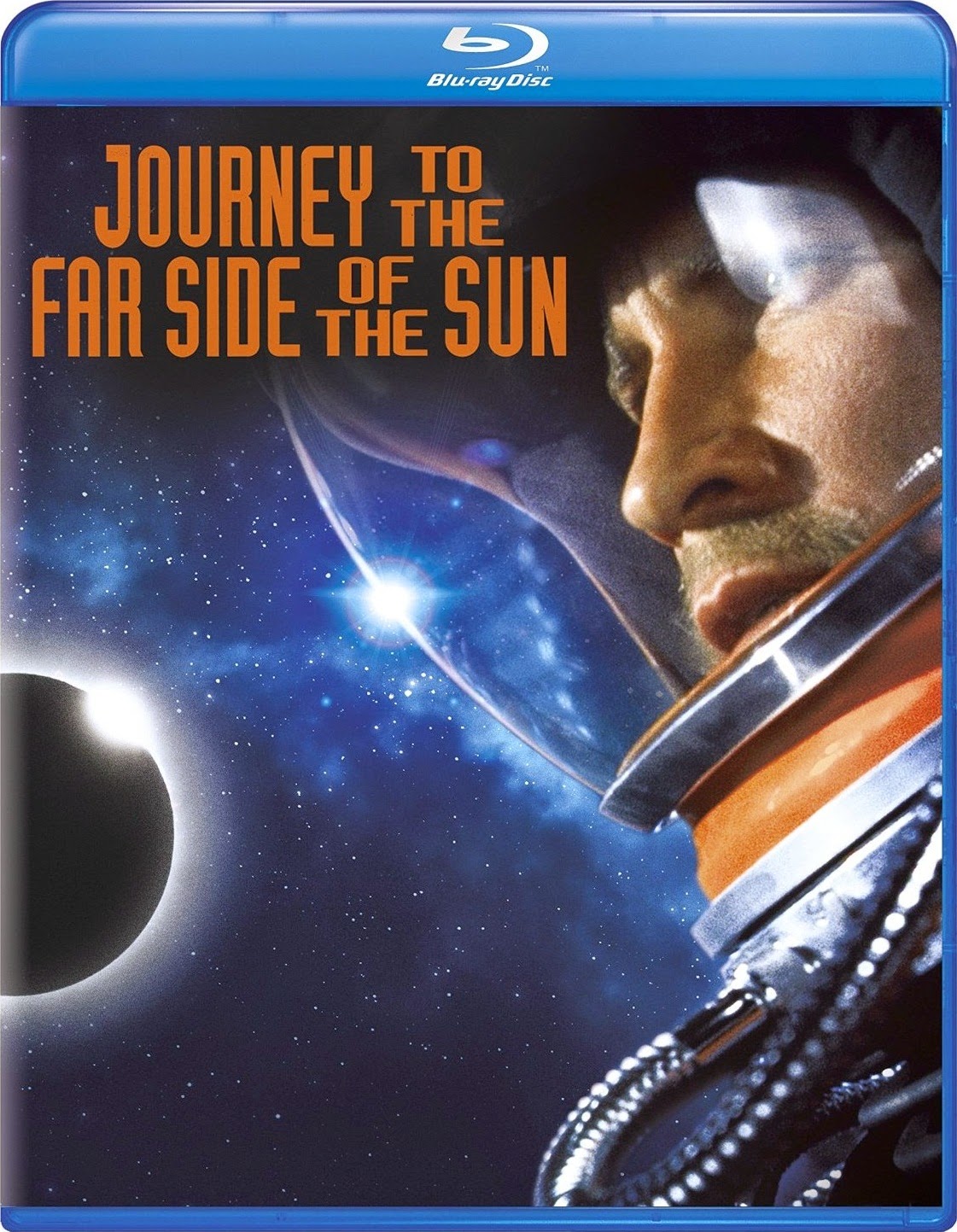 Journey to the Far Side of the Sun Blu-Ray – speaking of Blu-ray, Gerry and Sylvia Anderson's live action theatrical blockbuster (or at least movie that was in the theater) will be out on blu-ray in the U.S. On April 7. The movie is an interesting idea about a second 'mirror' Earth that an astronaut lands on. The movie has great special effects and pretty good performances but the plot is a bit far fetched. The movie was released in 1969 and was called Doppelganger in England. The movie stars Roy Thinnes (The Invaders).

Zeroids Vs. Cubes Web Series – a new animated series based on characters (robots to be exact) from Terrahawks is set for release this year. The series is by Anderson Entertainment. 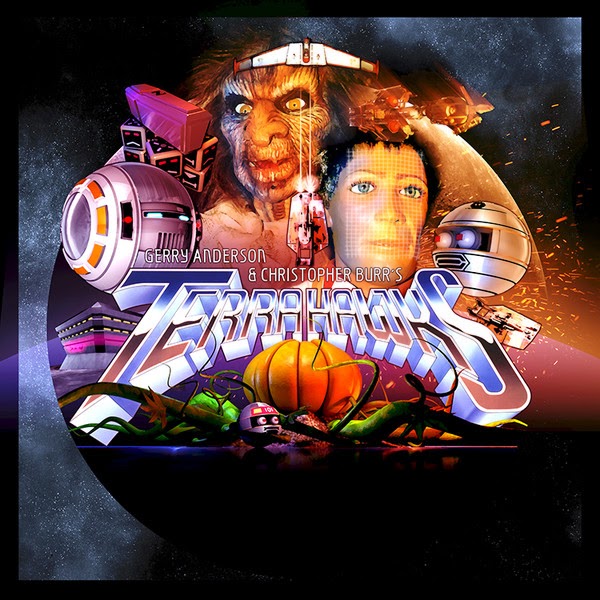 Merchandise Updates – some quick updates. Space: 1999 season 2 will be out on blu-ray in the UK later this year. No word on a US set. Network released a teaser disc set which included the two part “Bringers of Wonder” story as well as its movie version – Destination Moonbase Alpha. I have to say the print of the episodes is fantastic looking.

Big Finish is releasing a Terrahawks audio series in April and pre-order of the CD and digital download in available. 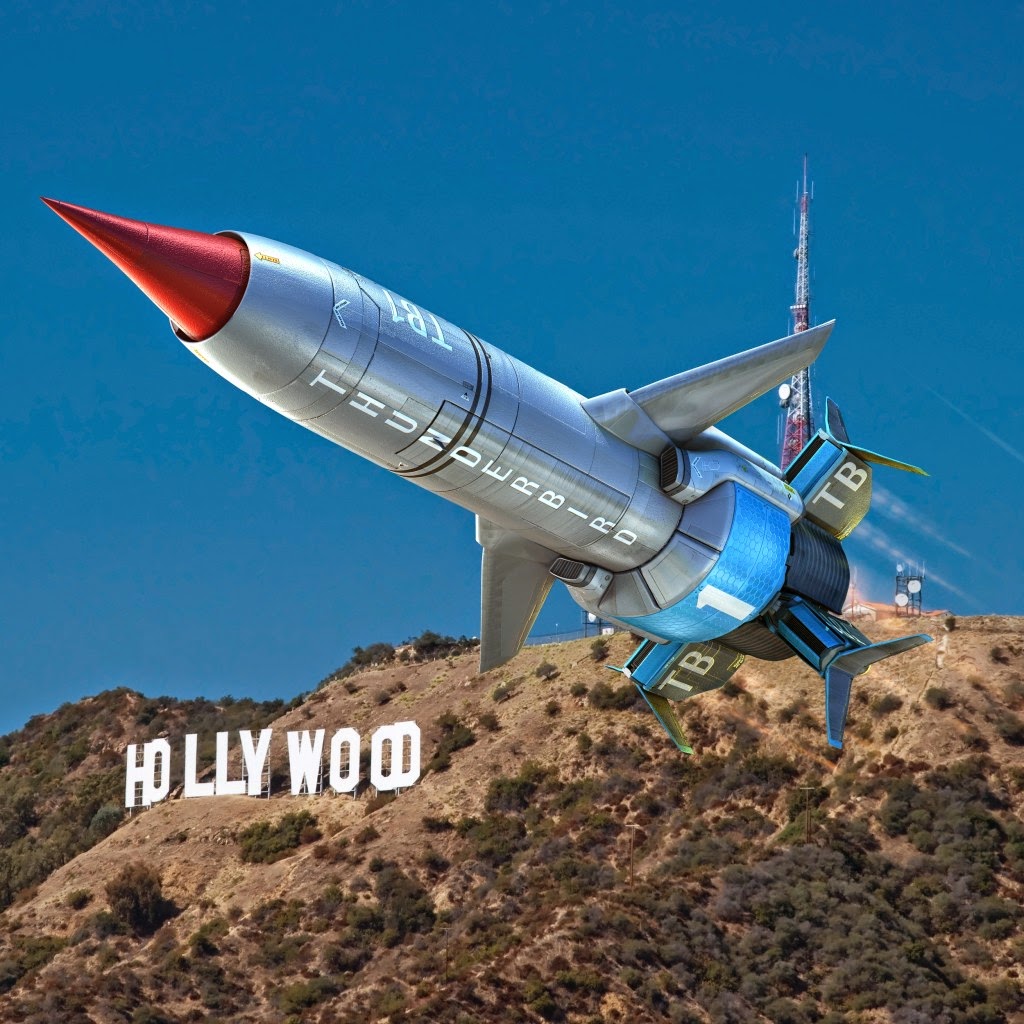 Thunderbirds Are Go – We will continue to update you with info on this new series which is slated to air in the UK this April. I would expect more trailers and photos soon. For now -

Sylvia Anderson Meets Lady Penelope – The original voice for Thunderbirds' Lady Penelope, Sylvia Anderson has been keeping an eye on the new Thunderbirds Are Go series and is excited that Rosamund Pike is the voice of Penelope in the new series. Anderson has met with David Graham, who voiced Parker in both series. Sylvia is currently working on a new TV idea called The Last Station which was funded by Kickstarter and will feature a sci-fi series with plenty of music. 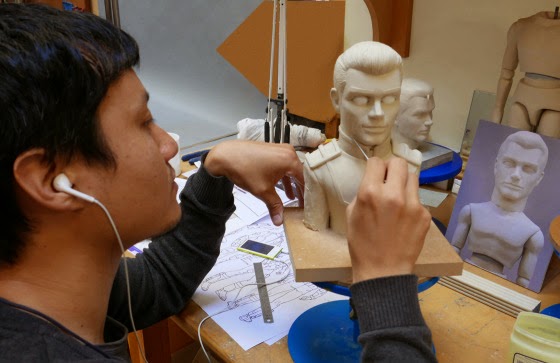 Firestorm Production is Ongoing – Gerry's son, Jamie, is hard at work on Firestorm, a new idea based on his father's idea that was made into an anime in 2003. The anime was received badly and has been lost in obscurity. Jamie is hoping to launch a new series which will feature old school effects and puppets in the scope of Thunderbirds. He is working on a short pilot that was funded by Kickstarter. The latest production blog talked about how the puppets for Firestorm will be slightly bigger so to allow the electronics and servos to fit into the heads.

Well, that's all for now. I promise the next one won't be nearly as long but that all depends on the news. This year is the 50th anniversary of Thunderbirds and with Sylvia and Jamie both working on projects and the new Thunderbirds series coming soon as well as rumors of more blu-ray releases, it certainly looks to be an exciting year!!
Posted by SHADOKP at 11:39 PM