Farewell to 12 - Doctor Who - Flatline Review 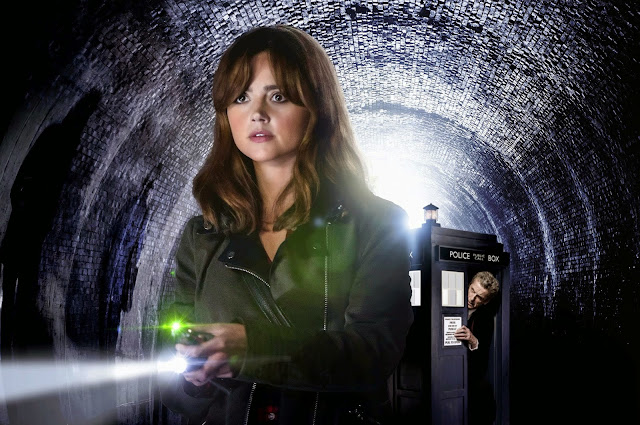 Doctor Who:
Flatline
By
Jamie Mathieson

"I don't know whether you're here to invade, infiltrate, or just replace us. I don't suppose it really matters now. You are monsters! That is the role you seem determined to play. So it seems that I must play mine: The man that stops the monsters."

When Steven Moffat told writer of Kill the Moon Peter Harness to Hinchcliffe the $#@% out of it I don’t think he meant that one story but I believe he meant Series 8 in general.  In fact Flatline is the closest a new Who story has come to achieving this and it would make Robert Holmes smile.  I’m sure he is smiling from heaven as Jamie Mathieson has so far been able to replicate his style of horror in Doctor Who. 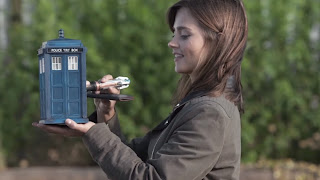 I liked his previous story Mummy on the Orients Express but I really was blown away with his second Who story this series Flatline.  Flatline was a really clever episode in my opinion and I really liked how it all worked out.  I really liked the atmosphere of this story as it was pretty scary and intense with some really good horror scenes.  For example it was really scary seeing PC Forrest meeting her demise.  Being sucked into the floor was chilling and then seeing her nervous system on the wall was creepy.  But it got better as Clara and Rigsy where now trapped in that room and facing certain death.  Seeing the tension and terror on Clara and Rigsy’s face really made the scene and it reminded me of the way they used horror back in the Classic Series.  It had that type pf feel to it and I saw quite a few similarities in the storytelling.  You had horror, a monster, smart storytelling and The Doctor using his intelligence to figure out a solution.  This was Doctor Who at its finest and something that has been lacking in the last 9 years since the show has returned. 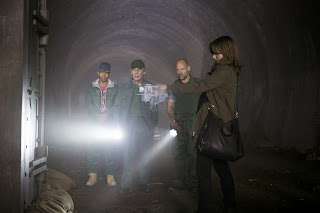 I really like the way they have been developing Clara this series.  I have been a little bit critical of the way Clara has taken center stage at times but in Flatline it worked really well.   I really liked the way Clara handled the situation and took center stage in this story.  It reminded me of how the Virgin New Adventures were and how the companion was the main character with The Doctor in the background.  What made it more effective was that The Doctor was trapped in the TARDIS and practically useless and had to rely on Clara for everything from sight to sound.   What sold the plot was being able to see The Doctor helpless and out of his comfort zone.  It made the whole situation with Clara in charge more believable and seeing him trapped in the TARDIS trying to figure things out with Clara being the detective was a key point in making this story that much better. 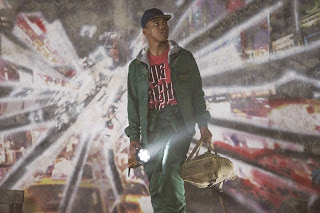 I thought Flatline was one of the best performances from Jenna Coleman.  We did not have any of that angst that has surrounded her lately and it was good to see her just by a normal companion.  I did like how she was portraying herself as The Doctor and it worked really well as at times she did seem very Doctorish.  Her performance was pretty believable and I do say this has been my favorite Clara story so far.  Plus Clara figured out how to save the day in Doctor style by using her brain and using the enemy’s power to her advantage.

I really liked the monster in this story.  It was clever to have a monster from another dimension invade Earth by living in the walls.  The Boneless were pretty creepy and even though the CGI version was ok but nothing special to look especially when they took shape but as the slugs in the wall is where I thought they worked.   Even though the human looking ones were ok CGI it did not harm the overall storyline or enjoyment of Flatline.  What Doctor Who is good at is using normal everyday objects like WIFI and now walls and make them scary and menacing as it gives us something to think twice about. 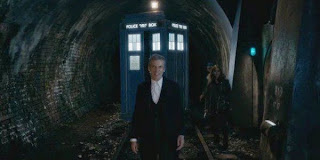 Flatline is was a really great episode and is definitely in my top three favorite stories so far from Series 8.  It was a really good story with lots of scares and it had a really clever science fiction feel to it also.  It just worked on so many levels and it is so far the closest thing we have had to a Classic Who episode since the show has returned in 2005.  A marvelous episode and I hope Jamie Mathieson will be back to write for Doctor Who again.
Grade A