Details on Doctor Who - The First Doctor Adventures Vol 1 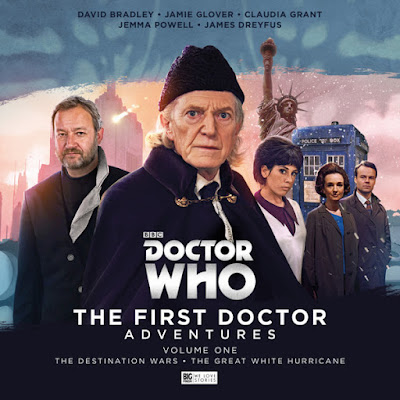 If you enjoyed David Bradley as the First Doctor in "Twice Upon a Time" then this box set s for you. Big Finish has released a set of two audio adventures featuring David Bradley and the actors who portrayed his companions in An Adventure in Space and Time.  You can order this box set from the Big Finish website.
https://www.bigfinish.com/releases/v/the-first-doctor-adventures-volume-01-1692

1.1 The Destination Wars by Matt Fitton

The TARDIS arrives in a gleaming utopia in the Space Year 2003. Has the Doctor truly brought Ian and Barbara home, to glimpse their future?

The world owes much to its legendary Inventor, and Susan finds herself face to face with the great benefactor. But soon, the time travellers are in a world at war and the Doctor must confront his past.

Rival gangs turn streets into battlegrounds, and the Doctor and his friends are caught in the crossfire. They find themselves separated, and lost in the cold.

As the hunt for a fugitive turns ever more desperate, a blizzard descends. The snow keeps falling. And soon it will prove as deadly as any weapon...