Goodbye to 12 - Doctor Who - World Enough and Time Review 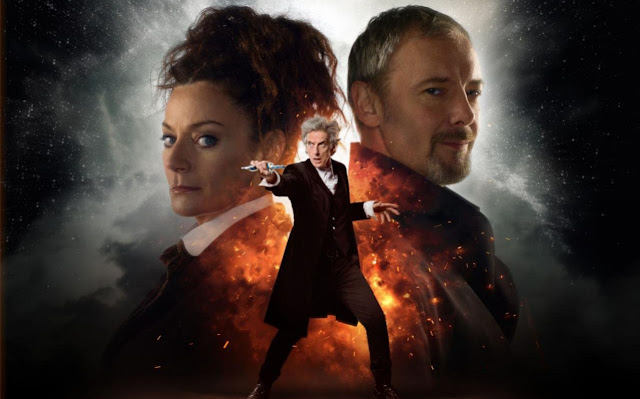 Doctor Who:
World Enough and Time
By Steven Moffat

A 4 mile spaceship that is tinkering next to a black hole and the escape velocity has made time a bit out of whack.  The gravity of the black hole has manipulated time that the part of the ship next to the black hole is moving very slow while the bottom of the spaceship is moving fast.  This becomes a problem later on when The Doctor figures it out when he is desperate to get back to Bill who was shot with a laser right through her chest. What lead us to this point was that the TARDIS landed on the spaceship to conduct a test for Missy.  The Doctor picked a distress call and with the aid of Bill and Nardole will go with Missy to investigate what is wrong while he stays in the TARDIS monitoring to make sure Missy can be good.   Apparently the travelers were detected and what is on the bottom of the ship seems to be coming up to the top to take whoever is human and whatever it is has the janitor Jorj frighten enough to kill whoever is human and to The Doctors horror he does. 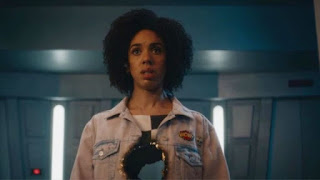 Bill is then taken down below by the faceless creatures and saved by a surgery that gave her an artificial heart.  She then befriends one of the occupants named Razor who seems to know an awful lot about what is going on and The Doctor.  Once The Doctor, Missy and Nardole finally get down below to save Bill its has been several months and to their horror they find out that she has been converted to a Mondasian Cyberman.  While Missy finds out that the ship is from Mondas she is confronted by Razor who turns out to be an earlier incarnation of the Master and now the Doctor has his hands filled with more problems than he might be able to handle.

I really liked “World Enough and Time”.  I did.  It was a very good science fiction story that was also creepy and extremely interesting and unfortunately this type of storytelling has been missing from the Moffatt era.  I really liked the build up to the cliffhanger as the story focused on Bill and what her ultimate fate would be.   I enjoyed the interaction between Razor and Bill as that part of the story was by far the most interesting.  Her you see someone holding out all hope that her friend was coming to save her but you had to feel for her as time was moving so much quicker for her as month after month went by with her stuck with Razor on the floor that appears to be health hazard. The fumes from the engines are poisoning the air hence why the populations on that level are converting to Cybermen.   I thought the scenes with Bill investigating what is going on after her partial conversion was really creepy and one of the better creepier things ever done during the NuWho era.  It was dark and scary and when she confronted the converted patients especially the one that kept saying pain, pain,pain and you realize the knob on the IV drip was a volume control it just made that sequence that much darker.  Especially when she went to another patient and turn up the volume and it says “Kill me” was just spectacularly good horror. 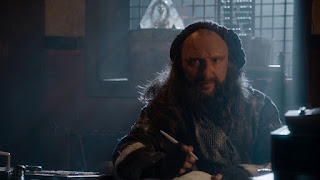 When I first watched “World Enough and Time” I knew John Simm was supposed to be in it and I was embarrassed to not figure out that he was Razor.  It was right there staring me in the face and I did not pick up on it until the reveal in the closing minutes.  Maybe because of his performance fooled me as it was pretty good and it did fool me.  Or maybe the part of the story with him and Pearl Mackie was so engrossing and gripping that it took me away from the fact that it was him all along.  Just seeing John Simm’s performance in “World Enough and Time” just makes me wonder what could have been when Russell T. Davies brought the Master and what we could have had but more on that in the review for “The Doctor Falls”. 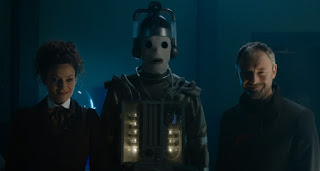 Peter Capaldi gives another great performance and the opening of this story gives us a glimpse of what might be coming in the Christmas Special.  I also liked the chemistry between Peter Capaldi and Michelle Gomez.  Along with Matt Lucas it would have been interesting what could have been if there were a few stories with just the three of them on an adventure with the Doctor trying to rehabilitate Missy.  Seeing the Doctor trying to make her good and the feelings he has for his old friend from when they were children when they both were good would have made an interesting story. Maybe Big Finish or Doctor Who Books could delve into that and give us that story.

“World Enough and Time” is one of the better stories in the Capaldi era and like most of the first part of the two part finale it sets up everything really well only to be let down by the concluding episode and well the streak continues and there will be more on that in the review for “The Doctor Falls”.
Grade A