Doctor Who - Twice Upon a Time Review 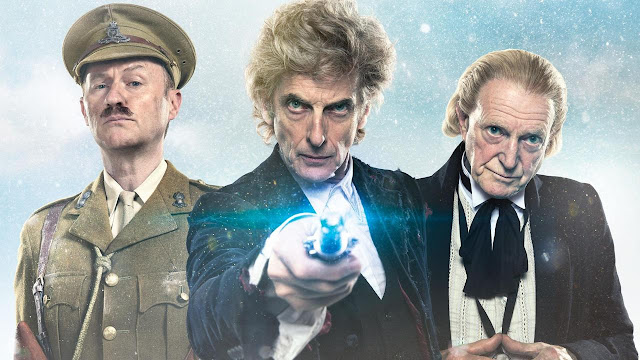 Doctor Who:
Twice Upon a Time
By Steven Moffat

The 2017 Christmas Special is here and it is a historical one that will be remembered more for the debut of Jodie Whittaker than for Peter Capaldi leaving Doctor Who along with Steven Moffat.  This years special is also a little bit more special as it also stars David Bradley as the First Doctor, taking the reins from the late William Hartnell, to join forces in a rare multi Doctor story.  Needless to say this story has a full complement of characters.  Oh did I mention that Bill returns in this story too?  Yes she pops back also as Peter Capaldi is joined once again by Pearl Mackie. 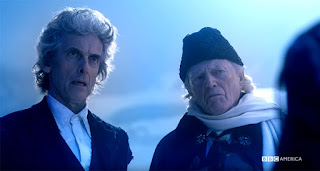 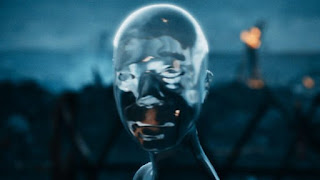 So that is where the story starts to take place when we see the two Doctors talking together and all of a sudden time stops.  Nothing is moving at the Antarctic at all well except for a British Captain from 1914 during the First World War.  It is during this exchange with The Captain that the story starts to pick up as the three men who are now inside the TARDIS are captured by the glass looking aliens called The Testimony.  The Testimony are from the future and come and collect a vital part of the human when the die and now they want The Captain to be brought back to when he dies to ensure the timeline to be where it should be.  As you can imagine this doesn’t set well with The Doctors and of course the plan to stop it along with Bill who just happened to appear from nowhere on the Testimonies ship.   As we soon discover once The Doctor arrives on an unnamed planet to ask for the help of Rusty Dalek the Testimonies have not committed anything evil in fact from the invention of Dr. Helen Cray of New Earth they take the memories from those who have passed away and put the in an avatar to speak with their loved ones in which we find out that Bill is one of those avatars. 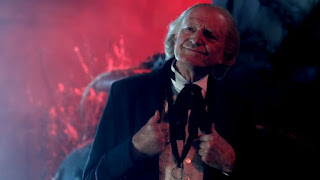 Which takes us to the conclusion in which The Doctor changes the rules again and The Captain is saved.  It turns out The Doctor lands the TARDIS a few hours after The Captain left and returns him right at the moment of the 1914 Christmas Truce where both sides stopped fighting on Christmas Day something that has never happened again in any war and is one of the true miracles of Christmas.  This actually happened and there are many books on the subject and also a movie so if you have the time you should check out and learn about what happened on December 25th 1914. 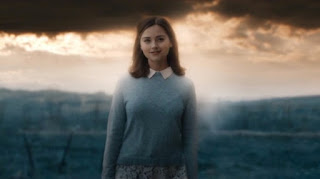 “Twice Upon a Time” wasn’t all that bad of a story.  I had my reservations about it as the current string of regeneration stories in the newer Doctor Who have had a bad track record. Stories like “The Time of the Doctor” and “The End of Time” were cluttered with lots of characters and stories that didn’t make all that much sense at all.  Though the farewell in “The End of Time” is one of my favorites I can’t say all that much for the actually story. But thankfully with Peter Capaldi’s last story we are given a story that is very enjoyable and makes sense. What we have are two characters at a crossroads on whether they want to go on.  Both Doctors are questioning the regeneration process and it takes one last adventure and to help a soldier, who happens to be Brigadier Lethbridge - Stewart’s relative to shake them from their doubt. Everything else in the story was frosting on the cake as it was mainly a story about their own mortality. 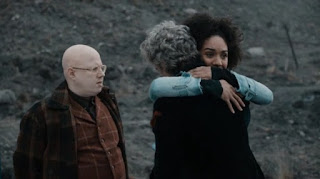 I really liked the pairing of the First and Twelve Doctors but Steven Moffat didn’t really capture the essence of the First Doctor.  He didn’t write him all that well and at times I was shaking my head at what he was saying.  I know the 1960’s was a different time but the First Doctor wasn’t as sexist as he was portrayed in “Twice Upon a Time”.  In fact he never mentions to his female companions to clean the ship and stuff like that but instead he is seen as a grandfather type to Susan and Vicki.  If there was a low point of “Twice Upon a Time” it had to be the way Steven Moffat characterized the First Doctor. 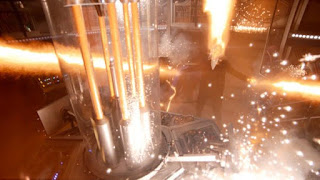 I did like having Bill being an avatar of her memories. It made the farewell scenes all that much better as we didn’t have The Doctor traveling back to see his former companions or hallucinate seeing Amy or anything like that.  It made perfect sense and was the right thing to do seeing his old companions as memory avatars.  It was also good to see Jenna Coleman return as Clara and have him get his memories of her back. With her and Nardole return was a nice touch and very a touching farewell as they help persuade The Doctor to keep on living.

I really enjoyed Peter Capaldi as The Doctor.  Like most I was sad to see him go and was glad he got a good send off.  I really liked the speech he gave before he regenerated.  It was like a lecture for the next incarnation on how to act as The Doctor and what it means to be The Doctor.  It also wasn’t mushy and sappy and you didn’t have crying Doctor saying goodbye.  His last words were like he was letting the part he enjoyed and handing it off to Jodi Whittaker.  It just seemed to me like a passing of the torch type of moment and a pretty simple goodbye. 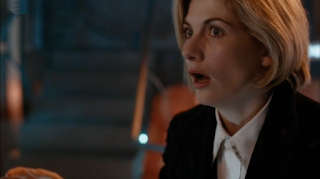 We also get our first glimpse of Jodi Whittaker and it appears we are recycling another cliffhanger as we have seen something similar before when Matt Smith took over from David Tennant.  It would of been better if they came up with something else but I’m guessing we’ll find out in time when the show returns in the Fall.  So in the words of the new Doctor this story was brilliant and a very good send off for Peter Capaldi and one of the better Christmas Specials and Regeneration stories in the new series.
Grade B+