Goodbye to 12 - Doctor Who - Empress of Mars Review 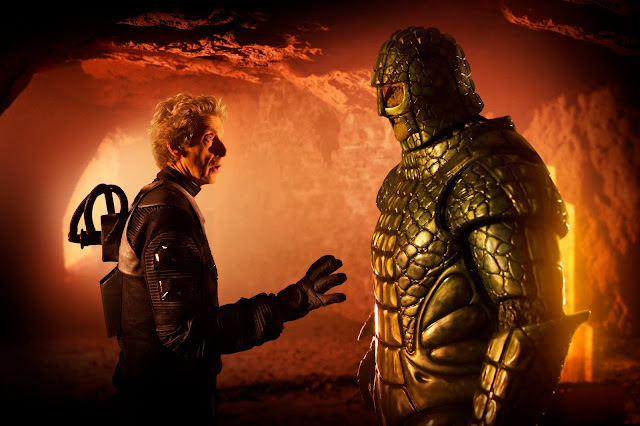 Doctor Who:
Empress of Mars
By Mark Gatiss

“There will be more, you idiot. The Hive is active. Don't you see? They'll do anything to defend their home planet.”

The Doctor, Bill and Nardole appear to be at the Florida NASA center to watch the incoming images from the Valkyrie space probe.  When they eventually see the words “God save the queen” under the polar ice caps it prompts them to head to Mars in the year 1881.  There they find, well The Doctor and Bill as Nardole is taken away by the TARDIS, a group of her Majesties army who have been aided by an Ice Warrior to take Mars in the name of Queen Victoria.  Friday, the Ice Warrior named after the character in the Robinson Crusoe book, has promised them jewels and riches in exchange for help to back to Mars.  But The Doctor is pretty suspicious of this and thinks Friday has a higher motive in hand and his hunch is about to become a reality once they find the area of the Ice tombs and the Empress herself. 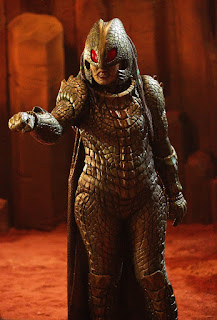 I like the Ice Warriors.  Ever since I first saw them in The Curse of Peladon and again in The Monster of Peladon I was interested in finding out more about them.  Thanks to the TARGET books novelistaion of the show I was able to read the stories “The Ice Warriors” and “The Seeds of Death” and then eventually watch Seeds when my local PBS finally got what was available of the Troughton era.  I was thrilled when they brought the Ice Warriors back in the Mark Gatiss story “Cold War”, which I really enjoyed, so when I heard that Mark Gatiss would be writing another story featuring the Ice Warriors for Peter Capaldi’s Doctor is was like can’t wait.  Well it wasn’t the type of story that I was expecting.

In fairness I did not hate Empress of Mars at all.  It just wasn’t the type of story that I was expecting.  I guess I was expecting a story like what we had in the Troughton era where the Ice Warriors tried to invade Earth and were a lot more sinister. But what we got was a story somewhat similar to the “Tomb of the Cybermen” at least with the hibernating Ice Warriors and their Hive and the exhibition to uncover the lost Ice Warrior base was pretty similar to that 1967 story but this time the villains are clearly the good guys and the main protagonist is the British Soldier Captain Catchlove who appears to be all about fighting in the name of the British Empire and keeping Mars and all its riches for Queen Victoria.  That type of storytelling has been done before where you have two groups that are at the center of a dispute that eventually gets violent that is eventually resolved by a selfless act by the guy that doesn’t want to fight.  We get that with Colonel Godsacre who clearly wanted to resolve the situation by talking it out but was clearly blindsided by the opportunist Captain Catchlove who was looking for any excuse to finally take over command. 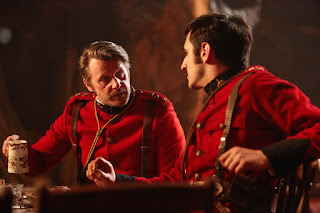 The problem I had with “Empress of Mars” was that it was set in 1881 and that we had British soldiers dressed in steampunk spacesuits on Mars.  Yes Friday helped them get to Mars with the technology from his spaceship but even still I did not like this concept at all.  I mean it is a minor grip as the overall story did not hinge on the era that the soldiers came from but more on the overall message of talking It out and helping each other rather than fighting it out to the last soldier.  But still to me it seemed a bit of any eye roller that these soldiers from the Victoria age had little difficulty with space travel and being an alien planet.  Like I said it was a nitpick problem and really wasn’t that much of a big deal. Just like the Empress sounding very closely to the Racnoss but not much you can do about that when the Ice Warriors have that type of speech pattern. Not a big deal. 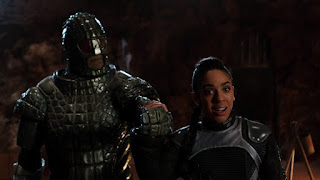 I really liked the performance of Pearl Mackie in this story.  Bill had some pretty good scenes and dialog that were really good.  I really liked how she tried to convince the Empress not to attack and forgo this course of action.  I also enjoyed how Bill went off on Captain Catchlove who believes in aliens and being on Mars but not in woman police force.  So far this season Bill has been a lot better than I had expected to be and also be a companion who asks questions and has a good banter with the Doctor.  The Capaldi era has been missing this element and it is good to see the 12th Doctor have it in his final season.