Details on Doctor Who - The Wreck of the World 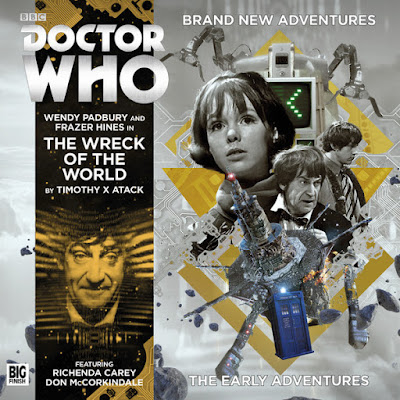 Out now from Big Finish is the continuing adventures of the Second Doctor in The Early Adventures and this time he is joined by Jamie and Zoe.  You can order this audio adventure at the Big Finish website.
https://www.bigfinish.com/releases/v/the-wreck-of-the-world-1322

Undergoing repairs in deep space, the TARDIS is caught in a collision with the huge, decaying wreck of a starship. Zoe, spacewalking, is separated from her companions in the crash, and the Doctor and Jamie wake to find the TARDIS fused to the side of the ship.

Venturing inside to rescue their friend, they discover that they are on board The World, the very first colony ship to leave Earth, lost mid-voyage under unknown circumstances.

And they are not alone. A terrible suspension chamber is filled with dead, withered human bodies, and a team of gun-toting astronauts are stalking the corridors. But a far greater threat lurks deep inside. The terrifying force responsible for the scuttling of the ship is active once more - and if it can’t be stopped, it won’t just be the end of this World. It’ll be the end of all of them.