Goodbye to 12 - Doctor Who - The Eaters of Light Review 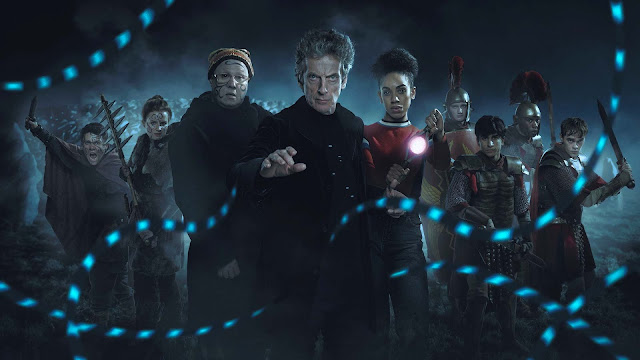 Doctor Who:
The Eaters of Light
By Rona Munro

“Well, it didn't work. You got a Roman legion slaughtered, and you made the deadliest creature on this planet very, very cross indeed. To protect a muddy little hillside, you doomed your whole world.”

The TARDIS lands in 2nd Century Scotland to try and find out what happened to the 9th Legion.  Bill is so sure that they will find the 9th Legion that she wagers with The Doctor about it.  He is skeptical but encourages her to go off and find her Romans.  As Bill heads off one way The Doctor and Nardole head off on another where they come across a village.  This village is very special as it has the gate which their gatekeeper is in charge of protecting.  The gate is a portal to another dimension which is home to a creature that was released to destroy the 9th Legion.  The problem is that the creature is still out there and so is Bill with all that remains of the 9th Legion. 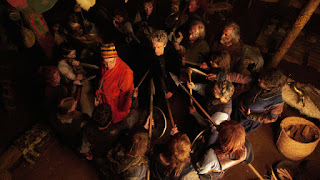 “The Eaters of Light” sees the return of Classic Doctor Who writer Rona Munro who wrote “Survival” which was the last broadcasted Classic Doctor Who story from Season 26 in 1989.   “Survival” was the Sylvester McCoy story that had The Doctor once again facing his arch enemy The Master along with the Cheetah People.  It was a decent story if you get past the costumes and the 80’s style soundtrack.  Her second effort “The Eaters of Light” is a much better story as it takes from the mystery of the past with the 9th Legion and adds a science fiction aspect to it. 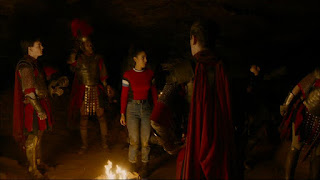 From watching the trailer I didn’t have high expectations for “The Eaters of Light” as I viewed it as a filler story that would have been the same bland story that we usually get before the series ending two part story.   I for the most part enjoyed this story as it really gave us more insight into the character of Bill and we get to see The Doctor and Nardole have some time together during an adventure instead of seeing them bicker all the time.  The chemistry between the two is really good and they feed off each other pretty well also.  It is just a shame that we didn’t get more of Nardole and The Doctor together. 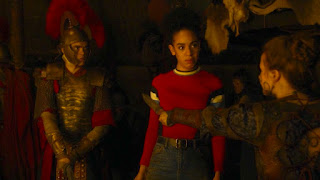 I really enjoyed Bill and the left over 9th Legion.  It was probably the highlight of the story.  You see her trying to get the scared and defeated 9th Legion to rise up and not give up and to get out of hiding.  If it wasn’t for her trying to get them going to find The Doctor the creature probably would have killed them all.  Instead she gets them going and they eventually meet up with the Doctor.    The Doctor was more or less doing the same thing with Kar the Gatekeeper.  He keeps preaching to her that what she did was wrong and that they need to come up with something to stop the Light Eater.  As The Doctor finds out Kar let the creature out of its dimension to kill the 9th Legion but in doing so she might have caused the destruction of Earth.  With the two groups coming together they both realize what must be done to save the day and the two parties join up and go into the dimension to guard the gate. 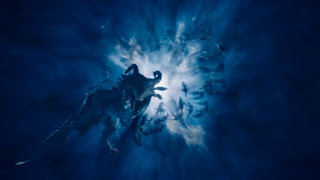 “The Eaters of Light” also further enhanced the Missy storyline as The Doctor had her in the TARDIS to watch what was going on.  He more or less chides her and says you need to open your mind and listen to the music being played by the villagers and take in the meaning behind it.  As we learn in the Series 10 finale it doesn’t work but it is good to see for a moment the human side to Missy instead of the psychotic villain that we are accustomed to seeing.

I wasn’t all that crazy about the creature and the dimension.  The creature looked like any other creature that was cgi’d and wasn’t all that spectacular.  Plus it was just another rampaging brainless brute that we have seen a lot of lately in Doctor Who.  But for this story it worked along with the really strange dimension door that really would be more beneficial being in a cave not in a hut.  But for the sake of this story it was ok.  These are just minor problems and nothing to ruin the overall enjoyment of the story. 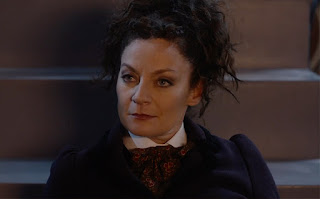 It was good seeing a story from Rona Munro again.  I really enjoyed “The Eaters of Light” and “Survival”, read her Target novelization of the McCoy story it is so much better than what was broadcast, and hopefully Chris Chibnall will bring her back for his run on Doctor Who.  While “The Eaters of Light” is not the greatest it was far from the worst and I found it pretty entertaining and if you get the message that is being conveyed then you’ll enjoy it.
Grade B+