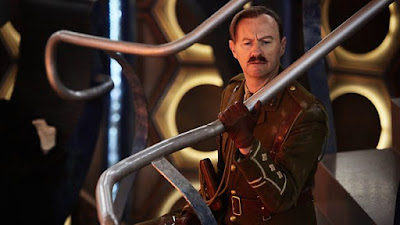 It's that time again when there is a new episode of Doctor Who and that means interviews from the BBC Media Centre.  Today we continue with the second interview with Mark Gatiss who plays The Capatan.

This is not just a Christmas special, it’s also the end of Steven Moffat’s era and the end of Peter Capaldi’s era. It’s got two Doctors interacting, two TARDISes, Bill is back, and there’s a very interesting new threat. Plus there’s lots of snow, lots of laughs and lots of tears and - not only that - we get to meet the Thirteenth Doctor. Lucky for some!

How did you get the casting call?

It happened very touchingly a couple of months ago. We were at a script meeting for the series ten episode I’d written, Empress of Mars, when Steven took me aside and said “I know you get booked up quickly so will you keep June and July free?” I said yes straight away, and then asked why! He said “I’m writing a part you’d be perfect for in Peter’s last story, and I want you to be there when I go”. Which is a Doctorish line in itself and made me well up.

It’s my privilege and pleasure to be involved. It was honestly one of the happiest jobs I’ve ever had. It’s been utterly delightful with Peter, Pearl and David. Though dealing with epic themes it’s actually quite a contained, intimate story on one level - in some ways a chamber piece. We’ve had a really good laugh. It’s been delightful.

You’ve been involved with Doctor Who since it came back in 2005. What was it like to finally get to travel with the doctor?

It was heaven - I got to do it all! At one point I even come through the TARDIS doors and say in amazement “it’s bigger on the inside than it is on the outside!”. All these things I’ve always wanted to do! I did have to ask myself how I would cope with experiencing that, and actually I made sure that my character didn’t get used to it too quickly. I wanted to make sure you get a sense - which is in the script - of The Captain being overwhelmed by it all and really shocked, rather than just taking it in his stride. But at the same time he is a soldier, so he reacts to certain other situations in quite a straight forward way.

I play a Captain from the First World War so there is a trench and battlefield element, which we filmed on location across a number of fields. We had one hundred extras playing German, French and British soldiers and it was really very moving to be part of. Something about the sheer amount of people in these splendid uniforms. The weather was quite drizzly, but it suited the story and it got very muddy, which of course it really would have been. There was an incredible moment when all these extras swarmed over the battlefield - at which point everyone on set was tearing up. It was moving and extraordinary to be a part of.

It’s a very funny and very lovely story. It’s perfect for Christmas as - for me at least - I feel that Christmas is always a mixture of happy and sad. It’s Peter’s last story and it’s obviously infused with that, but it’s a story that takes place out of time, where he has one last adventure before he goes and regenerates into the Thirteenth Doctor. And I suppose it’s about that - it’s about letting go.

The Twelfth Doctor’s encounter with the First Doctor is the central part of the story, with all the lessons that he learns from that.

How did you feel to be part of Peter’s final episode?

I know that Peter really just wanted to enjoy his last adventure. I’m sure that as he got to the last few days the sense of finality will have sunk in - you know, “that’s the last time on location, that’s the last time I’ll run down a corridor, that’s the last time I fight a monster…” etcetera, but it was a really joyous shoot to be a part of. With my old Doctor Who fan head on - Worzel Gummage style - to be a part of any Doctor’s final adventure was incredible, but particularly for Peter who I think has been magnificent. It’s the end of so many eras and you couldn’t help but feel that. It was a real pleasure.

Why should we tune in to Twice Upon A Time?

There’s always something magical about being on Christmas Day, and I think Doctor Who itself has a magic to it. Somewhere deep in its bones there’s something brilliant about this show, and the combination of the two things gives you that shiver. It’s a wonderful thing to be there as a Christmas Day treat. This episode, as it’s the end of an era, has that. Christmas is an interesting time too. There’s something special about it, something in the frosty air that always feels like it’s a good time for ghost stories or stories of enchantment; it’s happy but bittersweet. That’s what this ep has in spades.
Posted by DR5WHO at 6:03 AM

Email ThisBlogThis!Share to TwitterShare to FacebookShare to Pinterest
Labels: doctor who, Mark Gatiss, The Capatain, Twice Upon A Time