Doctor Who - The Moonbase DVD Review By @Paul_Bowler 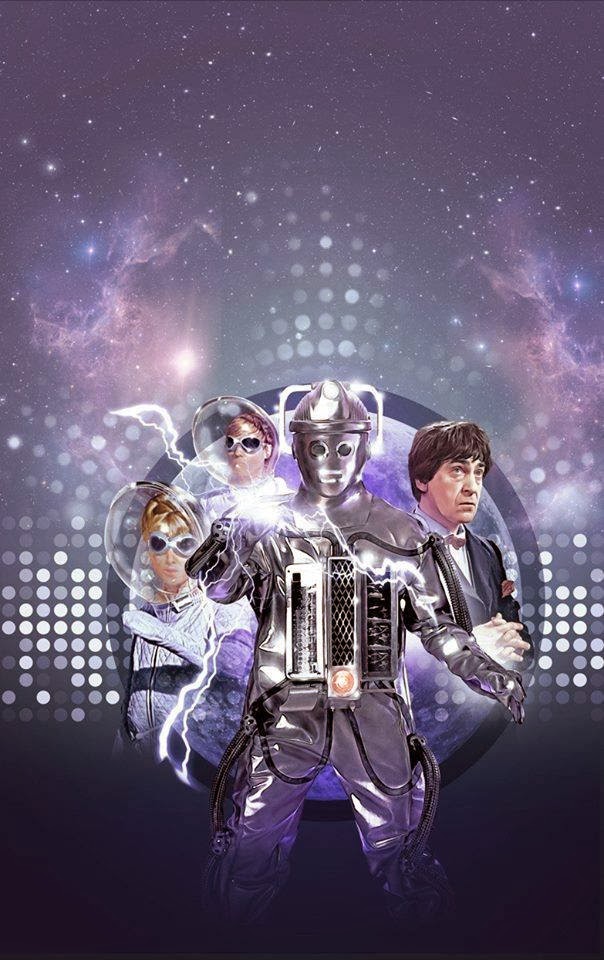 Doctor Who:
The Moonbase DVD Review
By Paul Bowler


The TARDIS is thrown off course and makes a bumpy landing on the Moon in 2070 where the Doctor (Patrick Troughton) and companions Jamie (Frazer Hines), Ben (Michael Craze) and Polly (Anneke Wills) discover a weather control station where a mysterious plague has broken out. Jamie has been injured exploring the lunar surface, while he recovers the Doctor offers to help Hobson (Patrick Barr) deal with the epidemic. The Doctor discovers the illness was caused by an alien poison the Cybermen have used to contaminate the food stores after secretly entering the base.

After taking over the Moonbase and seizing control of the Gravaton with crewmembers they’ve converted into slaves, the Cybermen prepare to use the weather controlling gravity beam to destroy all life on Earth. Polly and her friends manage to destroy the Cybermen in the base using a cocktail of chemicals sprayed from the fire extinguishers, which dissolves their plastic chest units. As more Cybermen begin advancing across the lunar surface, the Doctor gets Hobson to use the Gravaton against them, blasting them and their ships into space with the gravity beam. The Doctor and his companions return to the TARDIS where the Doctor activates the Time Scanner - a device that can show a glimpse of the future - and the image of a giant claw suddenly fills the screen… 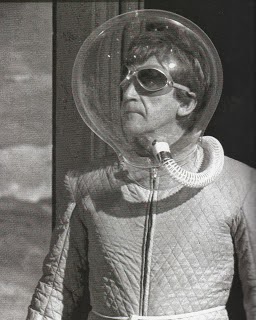 The Moonbase (1967) is the sixth story from Season Four, written by Kitt Pedler; it was the fourth story to feature Patrick Troughton as the Doctor. This latest DVD release from BBC Worldwide features the second appearance of the Cybermen in the series, having made their debut in William Hartnell’s final story The Tenth Planet (1966), they return with a completely new look. Patrick Troughton is also settling into the role of the Doctor, with the eccentricities seen in The Highlanders (1966/67) and The Underwater Menace (1966) giving way to a somewhat darker and more refined performance that would make Troughton’s second incarnation of the Time Lord so endearing for generations to come.

Whilst there are indeed some striking similarities with The Tenth Planet, the Antarctic setting is transferred to the Moon, General Cutler and the Moonbase’s commander Hobson both run facilities with a diverse multi-national crew, and each story has subplots (The former involving a space capsule in peril and the latter a strange plague debilitating the crew) that are instrumental in facilitating the arrival of the Cybermen. However, it is the subtle changes which The Moonbase heralds that are so compelling, and the brilliantly redesigned Cybermen would go on to become one of the programmes most popular recurring monsters.

Seeing how Jamie spends the majority of the story in the medical unit, Ben, and especially Polly, really impress in this story. Having encountered the Cybermen before, Polly recognises them instantly, Ben also recalls the events of the Tenth Planet and how Mondas was destroyed, but Hobson is not as easily convinced that the Cybermen have returned. Polly has some great scenes in this story: confident and resourceful, she helps tend the patients in the medical unit, later asking the Doctor about his medical qualifications as he investigates the cause of the plague, which she inadvertently helps solve with an impromptu coffee break, and she also devises a way to defeat the Cybermen using a special cocktail of chemicals to melt their chest units. 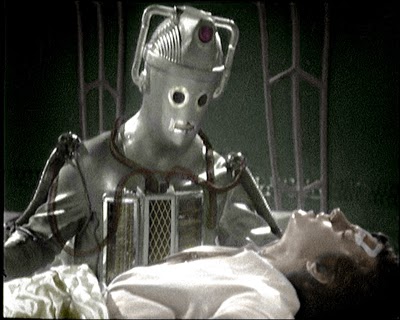 As the Doctor notes, there are dark corners of the universe which have bred the most terrible things, things that must be fought, and it is here, in this single moment of dialogue, together with the grave sincerity of Troughton’s performance, that virtually redefines the series in a heartbeat and effectively paves the way for one of the finest seasons in the programmes history - season five.

For their return the Cybermen received a brand new look, the cloth faces, bizarre voices, and cumbersome costume of their first appearance is superseded by an altogether sleeker and more imposing form than their predecessors. These mark II Cybermen are now encased in a gleaming one-piece silver outfit, their chest unit is far more compact, a smooth metal helmet gives them a chillingly emotionless countenance, the Cybermen’s hands now just have three silver digits, and they can also fire bolts of electricity from their wrists. The new voices for the Cybermen, created by Peter Hawkins, are also very different, replacing the sing-song tones used in the Tenth Planet with some distinctly cold and highly effective electronic tones, which make the Cybermen seem even more emotionless and threatening than their predecessors.

Though the Cybermen do not feature much in the first two episodes of the Moonbase, they certainly make their presence felt, creeping into the food stores to infect the sugar supplies with a neurotropic virus, there is a frightening scene were a Cybermen appears from the shadows and attacks Ralph (Mark Heath). Believing he is near death, Jamie wakes to find a Cyberman towering over him, and deliriously thinks he has seen the Phantom Piper as the Cybermen carries another sick crewmember away to its hidden spaceship. There is also a particularly eerie scene in episode two, where the Cybermen stalk and attack two crewmembers on the lunar surface. Together with some excellent lighting and stock music, director Morris Barry gradually heightens the tension, leaving the way clear for the Cybermen to dominate the last two suspense filled episodes, culminating in some impressive scenes where they march across the lunar surface to attack the Moonbase. 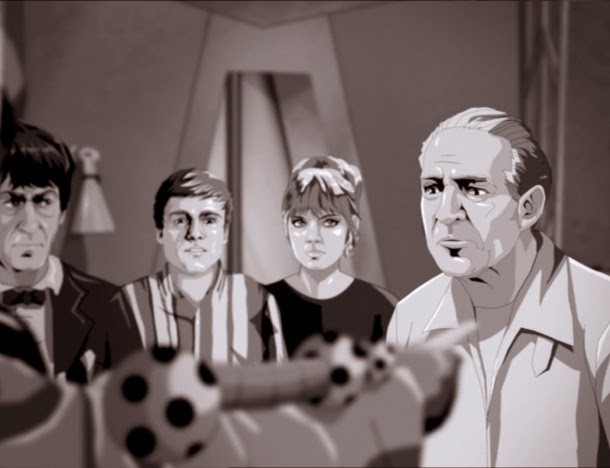 This story was especially topical at the time, it was the height of the space race, and producer Innes Lloyd wanted a story set on the moon. The Moonbase is also notable for featuring Victor Pemberton - Story Editor on The Tomb of the Cybermen (1967) and scriptwriter of Fury From The Deep (1968) as one of the crewmembers, and John Levene, who would go on to play the role of Benton, also appears as a Cyberman extra in this story. Incidentally, the novelisation of this story (Doctor Who and the Cybermen) was penned by the unaccredited co-writer of The Moonbase, Gerry Davis.

Unfortunately only episodes 2 & 4 of The Moonbase currently resided in the BBC archive, so for this special DVD release Planet 55 studios in Australia have used the same animation techniques employed on their restoration of The Reign of Terror and 10th Planet DVD’s, together with the surviving soundtrack, to recreate episodes 1 & 3 of The Moonbase so this four part story can be finally enjoyed again. The animation of these episodes is nothing short of phenomenal, the care and attention to detail makes this story come alive in a way that the audio soundtrack alone never could. The first episodes includes some great scenes of the TARDIS crew jumping around on the lunar surface in their spacesuits, and we also see the Cyberman attacking Ralph, but it is the third episode that is really special. We get to see the Doctor confronting the Cybermen, as well as Polly and the others devising their plan to fight back, the scene where the second Doctor seems to debate with himself about the Cybermen is brilliant, and the build up to the big reveal of the Cyber-Army is dramatically recreated. 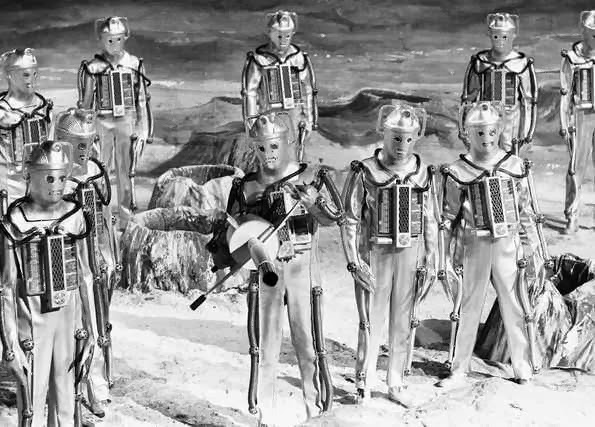 This feature packed release contains some excellent special features, including a commentary for episodes 2 & 4 by actors Anneke Wills (Polly), Frazer Hines (Jamie), Edward Philips (Scientist), and Brian Hodgson (Special Sounds Creator), with episodes 1 & 3 accompanied by interviews with Kitt Peddler’s daughters, Lucy Pedller and Carol Topolski, Lovett Bickford (Assistant Floor Manager), Cybermen actors Barry Nobel, Derek Chaffer, and Reg Whitehead, and the archive interview with producer Innes Lloyd. The standout extra on this disk though is Lunar Landings, a fantastic look back at the making of The Moonbase, featuring interviews with Anneke Wills, Frazer Hines, Reg Whitehead, and production assistant Desmond McCarthy. I really enjoyed hearing their memories about this story, Anneke Wills account of filming at Ealing for the weightless sequences on the Moon were fun to hear, as well as the story about Patrick Troughton’s lucky escape when part of the Gravaton set collapsed, and of course the DVD also includes a photo gallery, the superb production information subtitles, Radio Times PDF, and a coming soon trailer.

While not exactly perfect, The Moonbase stands up fairly well, despite some padding in places and that ludicrous scene with the tea tray. Patrick Troughton is excellent as the Doctor, the regular cast have plenty to do, and the redesigned Cybermen are really impressive. The way they initially strike from the shadows is highly effective, stalking the base and kidnapping some of the crew, who are then subjected to a conversion process that reanimates them as Zombie-like slaves. Only the ending is a little disappointing when the Cybermen and their spaceships are rather unceremoniously dispatched. The Moonbase effectively sets the stage for the base under siege format that became so synonymous with the Troughton era, a template that would ultimately be honed to perfection the following year, in Season Five. However, there is still plenty to enjoy here, especially with Patrick Troughton’s great performance and Planet 55’s exemplarily work on the animated episodes, which makes The Moonbase DVD a welcome return to the early years of Doctor Who.
Posted by DR5WHO at 11:09 AM