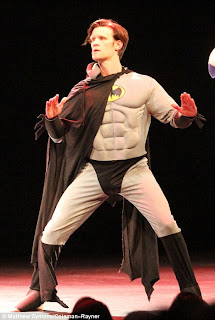 Matt Smith donned the famous cape and cowl over the weekend to play the World's Greatest Detective. Smith was participating in 24 Hour Plays (the scripts are written the night before, giving the actors just a single day to rehearse) in Santa Monica, Calif.

According to The Telegraph:


At the start of his play - called Gotham Autopsy - Smith was covered in a sheet in a mortuary before he came to life as a confused Batman. Comedian and Don't Mess With Zohan star Nick Swardson starred as Robin. Also in his play was Kick Ass star Lyndsy Fonseca and fellow Brit Saffron Burrows. Half-way through the 20-minute skit Smith dropped his fake American accent and became a cockney to huge laughs from the audience.

The Daily Mail reported that Bat Smith, er Matt Smith, was well received by the crowd of Hollywood insiders.


The British actor - out in Los Angeles to try to make it as a star stateside - had a crowd of film makers and industry VIPS in stitches as he larked around on stage.

Both the Daily Mail and Telegraph reported that Smith and his girlfriend, Daisy Lowe, mingled with Hollywood types at the show's after-party.
Posted by Harvey The Pooka at 11:35 PM