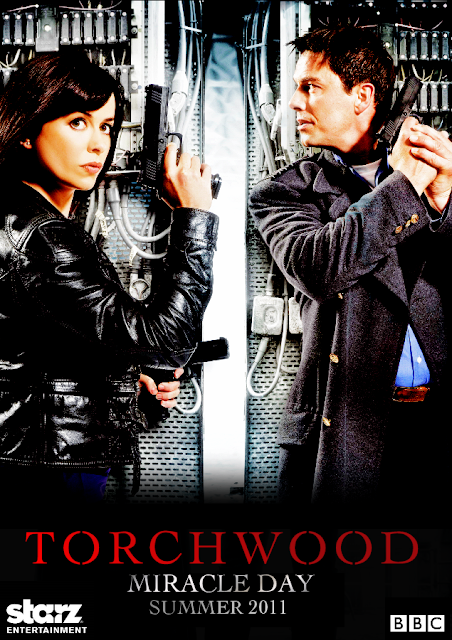 Starz has released a short episode description of the first seven episodes.  Apparently episodes eight, nine, and ten are being held in secret as to not ruin the ending.  The synopses from the Starz Torchwood website is as follows.
1.When death itself comes to a halt, the whole world faces its greatest danger yet. CIA agent Rex Matheson has only one clue - Torchwood.
2. As the Torchwood team is reunited, Jack realizes he's the most vulnerable man on Earth. A flight to the United States turns into a desperate battle for survival.
3. Torchwood goes on the run and finds a new enemy, but as they launch a raid on PhiCorp headquarters, Jack must confront the mysterious Oswald Danes.
4. The fight against PhiCorp takes the Torchwood team to California, where a trap is waiting. Meanwhile, Oswald and Jilly find themselves with an enemy of their own.
5. Torchwood goes undercover and discovers the terrible truth behind the Miracle. The enemy is closing in, and death is about to make a shocking return.
6. With Gwen, Rex and Esther trapped on both sides of the Atlantic, it's a race against time as Jack goes straight to the heart of the conspiracy.
7. Gwen must fight to protect her family and takes a terrifying journey, covering both miles and decades, as the long history of the Miracle is revealed.
Posted by DR5WHO at 10:04 AM