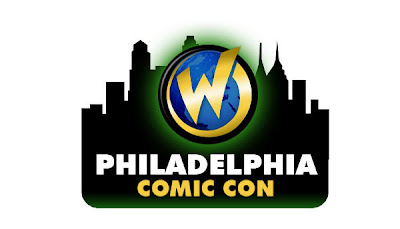 On Saturday the 18th of June Harvey The Pooka, Dr10who and myself Dr5who made our way down the 95 corridor to the city of Philadelphia to partake in the grand tradition of going to conventions and proceeded to wait in long lines and spend to much money on stuff we probably do not need.  Believe it

or not people find this to be fun.  I do I guess thats why I always go back for more and now I'm dragging my son along.  Well the three of us decided to get to the show late as not stand in a line to get into the con itself but as with all plans for a convention this didn't go as planned at all.  The doors opened at 10am and we got to Philly around 11am.  Well after walking around the building to get in a long line that we waited in until noon time to get into the Penn Convention Center.  Well if that is only thing to go wrong this Saturday then we are doing good.  Once in I was amazed at how many people were there.  The last time that I was there was back in 2009 and the crowd was pretty sparse.  So we the three of us got our bearings and proceeded to find John Schneider.  You may know him as Pa Kent in Smallville but I was there mainly for the Dukes of Hazzard.  I had a 3 shot of the 3 main cast members and he was the last one that I needed.  So it was pretty cool that I was able to accomplish this feat.  Plus Dr10who was able to see the General Lee.  The car that was in the show.  I don't know if it was one of the cars used in the show or a replica but it was pretty neat to see.
After that excitement he headed off to see the person that got us to this convention in the first place.  That would be Adam Baldwin from Firefly.  You could imagine his line was long and we had to wait in it twice as we got in it right before he had to do a photo session.  But that was OK as the line was long but it did move quite quickly and there were friendly people to talk with. Needless to say since the line was big I didn't get much interaction with Adam Baldwin but Dr10who did as he was dresses as Batman and of course took most of the attention which was OK as I only really wanted the autograph.  We then proceeded to where the comic book writers and artists were located.  The crowds at this area of the convention center were not as bad as to where the celebrities were.  I found this to be quite a relief as it was easier to maneuver and you were able to ha﻿﻿ve a good conversation with them without being rushed through the line.  This year I was able to talk to Ethan Van Sciver who will be working on the Firestorm reboot, Tony Bedard who is writting Green Lantern Corps now and during the reboot,  Shane Davis who was the artist on Superman: Earth One and Phil Jimenez who is working on Adventure Comics on a Legion story.

Of course we headed over to the dealers area and there were plenty of comic book, toy and t-shirt vendors.  All three of us found something to buy and smiles were evident after purchasing our stuff.  On a whole I would say it was a pretty fun day for us as we got mainly what we wanted.  The only grip I had was that there was a lot of people and as usual deodorant was not being used.  If I owned a deodorant company I would  set up a booth and give away free samples and hopefully get new customers.  So would I go again to Philly and experience geeks cosplaying and starring at the woman in there costumes of Anime and Comic Book characters.  Well hell yeah.  As long as there is someone for me to see and get an autograph from or at least a strong comic book presence then yeah I'll be back.  So thanks for a good time Wizard and hopefully next year will be just as good.

Here are some more photos I took from Philly.
More of Adam Baldwin 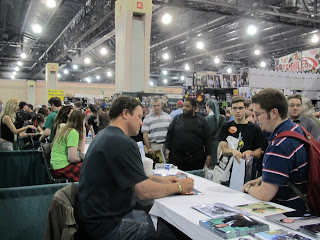 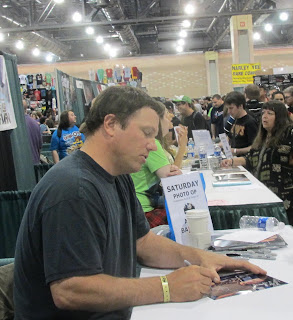