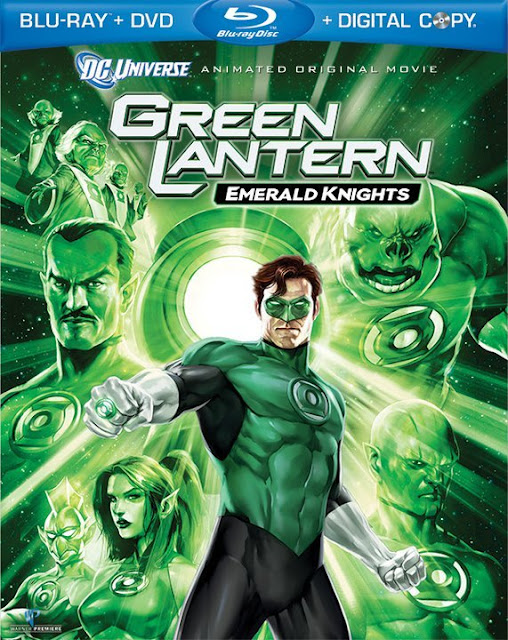 To get everyone in the mood for the big Green Lantern movie that is coming out this week DC Comics and Warner Entertainment released Green Lantern: Emerald Knights a direct to video animated movie.  This movie is centered on 5 stories told by Hal Jordan to new recruit
Arisia as they prepare, with the rest of the Green Lantern Corps, for an attack by Krona from the anti-matter universe.
As with past DC Comics animated movies the production levels were top notch and the animation was what you would expect from the people who brought us Batman The Animated Series and Justice League.  So after all that I thought this movie was pretty good.  I liked the different blend of stories that were told.  I even recognized a couple of them as all 5 stories were based on stories taken from Green Lantern Corps comic books from the years of past. All 5 stories were very good and could have stood alone on it's own.  I liked this movie due to the fact that it gives a history of the Green Lantern Corps for the casual viewer.  It makes it simple to follow along.  You do not have to be an avid fan of Green Lantern to enjoy this movie as this was clearly made for anyone to watch.
What is also cool about this video is that they got Nathan Fillion to play the role of Hal Jordan.  Most of the hard core fans wanted Nathan Fillion to actually be in the big screen movie but I guess this will have do.  I truly enjoyed watching this release from DC Comics and it got me even more excited to see the big screen Green Lantern movie this upcoming weekend.  So if you are interested in Green Lantern or you are a die hard fan of Green Lantern then I suggest you go out and either buy it or rent it from netflix or download it from netflix or itunes or where ever.
Grade A
Posted by DR5WHO at 9:05 PM