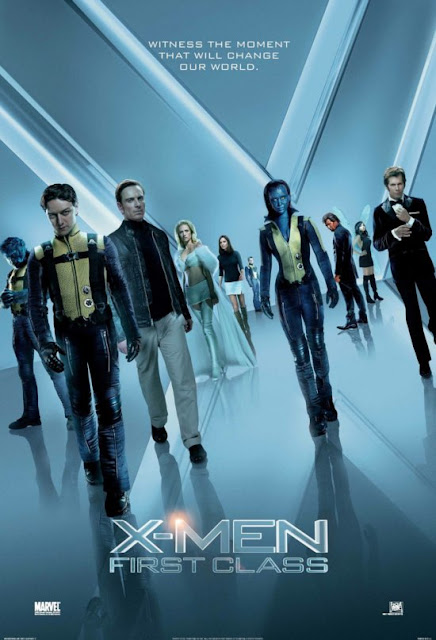 Now I'll confess that I do not know diddly squat about X-Men or their history but I do know a little to get by.  I more or less know who the major players are and did read the comic sparingly in the 80's but that is it.  So going to see this movie I had my doubts as the last X-Men movie was a clear disappointment and the Wolverine movie was decent but nothing to write home about.  So what did I
think of the new movie First Class.  Well I liked it.  I liked it a lot.  It was a pretty good movie that did not rely on special effects that much and did not disguise a weak story with an abundant of action scenes. This movie actually had a story that is pretty good unlike past X-men movies. I liked that this film could be watched by anyone.  You didn't have to be a reader of the comics or the past movies to enjoy this film as everything was explained and was easy to follow.

I was a bit hesitant about this film taking place during the Cuban Missile Crisis but it work for me.  How they ended up incorporating the film into these historical events worked and made sense to the overall story.  Especially how things got resolved and the beginning of the mutant /human fear factor.  I have to say that X-Men First Class was probably the best of the X-men stories as the makers of this film did their homework and came up with a well written and clever film that you wish more of the super hero movies could be more like.
The best part of the movie and this is a major spoiler is that Wolverine had a 30 second cameo.  When Xavier and Magneto were recruiting mutants they walk into a bar and approach Hugh Jackman's Wolverine he simply says @#$% Off and the two do a 180 and walk out of the bar.  I thought that scene was pretty funny and so did everyone in the theatre.
X-Men: First Class was a very enjoyable movie and if they make anymore I hope they are as good as this one.
Grade A