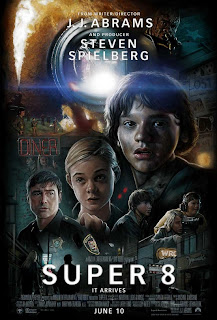 Remember those hot summers in the 70's and 80's when you went to the movies and experienced the magic of alien contact and innocent fun? Well, prepare to go back in time with Super 8.
Mild Spoilers
It is 1978 and a group of kids are making a movie about zombies. While on a midnight shoot they accidentally are witness to a train crash which promptly brings the involvement of the military. Secrets and cover-ups ensue until the kid's super 8 film is developed and the truth exposed. 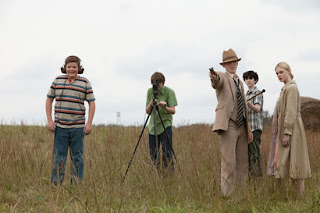 What this film is about is not what escapes from the train nor what the military is covering up. What highlights this film is the character relationships. We have a group of kids, all with their own personality which may seem stereotypical to these types of movies but click well in the story's structure. Joe Lamb is a boy who has just gone through a major hardship, one that has strained his relationship with his father, a local deputy. His friends are made up of a variety of likable personalities including a seemingly unattainable love interest, Alice and Charles, his best friend. The smart-alec and two others round out the team of amateur film makers. This formula of kids works well and is comparable to “Stand By Me.” The family drama is also excellent and fits perfectly into the film. 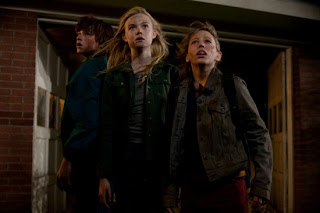 So what about the alien or whatever it is? Well, that is also well conceived. The entire mystery and how it slowly reveals itself over the story is perfectly paced. The level of action and suspense throughout the film balances out the drama and humor. With Steven Spielberg involved, one imagines that the film could potentially have all of these summer movie properties and in this case it most certainly does. Reminding this viewer of “E.T.” and “Close Encounters of the Third Kind,” Super 8 is a great addition to Spielberg's resume for this type of film.
There is a little bit of everything for everyone. I guess since there are so many identifiable elements that we have seen in other films one could say there is nothing new in Super 8. Maybe so. Still, it is handled so well and Director JJ Abrams has updated the feel of the Spielberg Summer Movie theme. With some great action pieces everything in the film, every cliché and predictable moment all works well. Truly a throwback in more ways than none. 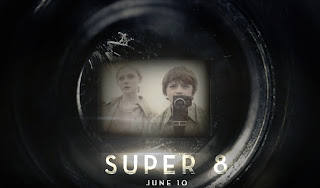 So recapture your childhood for a couple of hours and go have some fun.
Posted by The Knights at 8:49 PM