The Cabin in the Woods Review (Mild Spoilers)

The Cabin in the Woods 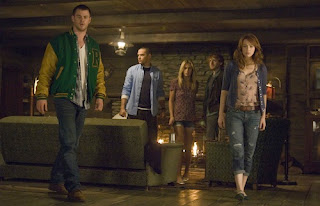 I am going to attempt to write this review with only mild spoilers. Here we go. A group of college age kids go to a cabin out in the woods. They went there to have some fun, have sex, get high and so on but the cabin has something else planned for them. In the flavor of Evil Dead, something is unleashed that threatens them all. 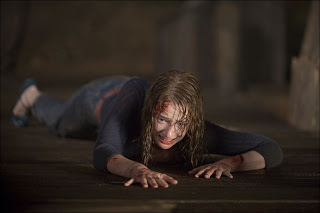 Pretty standard horror formula, right? Sure. As a matter a fact you will see so many of the usual horror elements in this film. We have the usual cast of characters including the druggie, the blonde bimbo, the virgin, the jock and the brain. The basement is full of old items and once they start messing with those, all hell breaks loose. When things get creepy the group splits up to cover more ground. Let the screaming begin.

If you have seen the trailer then you know there is something more than just this. Avert your eyes if you have not seen the trailer or if you do not want to know. There appears to be a forcefield around area surrounding the cabin. Something else is at work here. 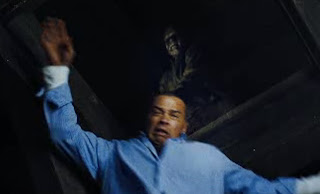 The theater wasn't crowded but many people clapped at the end. The only people who did not get into the movie were the two idiots who showed up 20 minutes after the movie started and talked through the next 20 minutes and then left. I am sure they were not even aware that something more was going on. Unlike most horror films you probably want to pay close attention to this in a vain hope of figuring out what is going on. Throughout the movie we see scenes that almost seem unrelated and so jarringly different that when the final act happens you are all in. 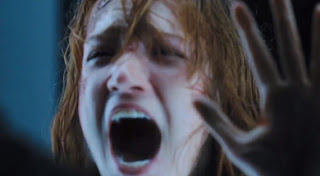 Oh, and the final word – this is not a typical horror film.

Best movie of the year so far.
Posted by SHADOKP at 10:16 AM