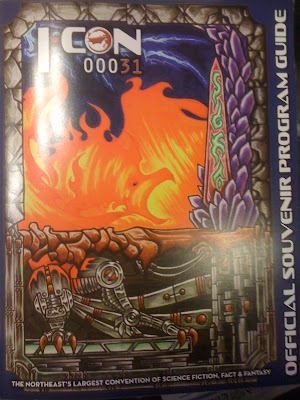 It’s another rainy, cold March day which means it must be ICON time.   Well that it is and this past March 31, 2012 The Knights (well four of us) partook in that geek filled love pilgrimage to the SUNY campus for the annual sci-fi and anime convention.   This has always been one of my favorite conventions and I can count on one hand how many that we have missed which is not many at all.  I have been taking that 3 hour plus drive since 1995 when I first enjoyed ICON for the first time.  So how did this year’s version which is the 31st edition measure up.  Well it was by far one of the best ICONS that I have attended. 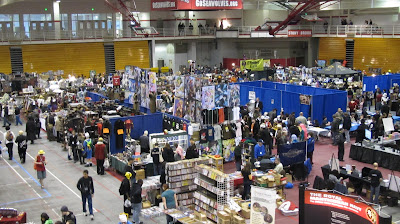 ﻿
With that said who I went see at this year’s ICON was a cornucopia of geek shows that I love. From Star Trek to Doctor Who there was something for everyone.  But for me I was mainly interested in seeing the guests from Doctor Who and Battlestar Galactica.  First the guest from Battlestar Galactica was one of the final 5 Cylons. I’m talking about none other than Rekha Sharma.  I felt sorry for her as she was suffering from laryngitis and was communicating to fans by writing on a note pad.  But it was cool meeting her and the fact that she took the time to try and communicate with us showed me that she isn’t the type to just phone it in and be phony.  But genuine and happy to see the fans that flocked to ICON to see her.
Of course the main reason for me to go to ICON was the presence of 3 Doctor Who guests this year.  Daphne Ashbrook, Frazer Hines and the 8th Doctor himself Paul McGann graced the SUNY campus with their presence.  It was pretty cool as I have never seen Paul McGann before. (Well I did interview him Friday before the convention. Listen to it here) So that means getting in the autograph line early and partaking in that other ICON tradition. Yep that’s right, watching the going ons and marvel at the costumes the fans are wearing from high above the dealers room on the track.  I enjoyed doing this to pass the time as you can see tons of great costumes.  Plus you have a great vantage point that it’s like sampling the fixings at a salad bar.  There were lots of good costumes this year. 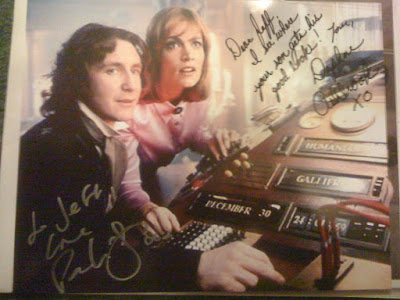 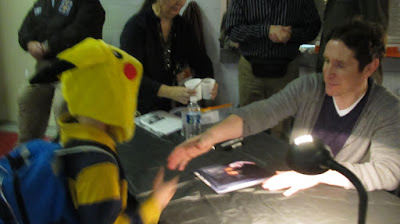 But the three Doctor Who guest were really nice to meet.  Frazer Hines was funny as usual and Daphne Ashbrook thought my son was really cute.  I can attest to this because he gets his good looks from me.  At least that's what Daphne Ashbrook wrote on the photo I had brought to be signed. Getting Paul McGanns autograph was truly the highlight of the convention.  In fact whenever you meet one of the Doctor’s it is something special.  To see the man that played your favorite character on TV definitely sends chills down your spine.  Plus the added fact that he took a few minutes to say hi and ask you a few questions and then shake your hand makes it all the more special. My friends, son and myself were all beaming after that moment.


I’m not one that usually likes to sit and listen to panels as most of the time certain fans will ask really stupid questions or questions that just don’t make any sense.  Well at ICON 31 I had the best time in quite a while watching two panels. First was the Frazer Hines panel over at the Harriman Building. It was called “An Hour With Frazer Hines” and it got off to a rocky start as there was not a projector to show his videos.  But the panel got through it by showing it on the laptop and the anecdotes that Frazer Hines told about his acting career were very interesting and filled with humorous moments.


One of the best panels that I have ever sat through was the Big Finish Panel with Paul McGann, Frazer Hines, and Jason Haigh – Ellery.  Not only was it informative about the going on’s with Big Finish but the three of them kept going off on sarcastic moments that were very entertaining even though they went off topic a few times but I didn’t really care as it was pretty funny and very entertaining.  It truly was one of the best panels that I have attended. 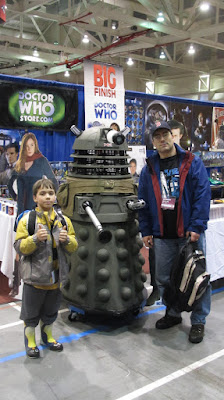 The dealer’s room was ok.  But I did notice that there was a pretty good amount of Doctor Who merchandise.  Like from the Who Store which had a Iron Side Dalek at its booth which was really cool.  There I found the new Big Finish Blake’s 7 Box set “The Liberator Chronicles.”  Cool that made my day as the dealers room was at least three quarter anime stuff.  I have to confess too buying some Pokémon merchandise for my son which made him ecstatic.

The trip was complete with the traditional supper at Pizza Hut.  The dinner wasn’t as good as past years but it did hit the spot after a long day at the convention which consisted of lots of walking as ICON is spread out throughout the campus. Like returning to Javits, where ICON used to be held, to see Bill Rodgers who voices the Pokémon character Brock.  But the dinner was good as we reflected on how good ICON 31 was and came to the conclusion that it was one of the best ever and one of the best in recent years. This was highlighted by spending a day out with my friends and son that also helped making it one of the best ever.