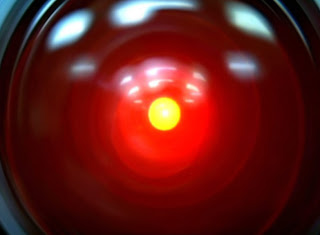 I want to thank everyone who has followed my top 25 Sci-Fi Movie list. It was fun putting together the list and then trying to come up with things to write about. Hopefully you were half way entertained or informed. Feel free to comment on your own top lists and provide feedback on mine.

The choice for the top position on my list was not an easy one to decide. It could have easily been one of 3 or 4 different movies. I chose the one that has safely been on my list for many years and is the first one I think of when someone says Sci-Fi movie. It is, in my opinion, the definitive Sci-Fi movie that all other movies are compared to. For a work of art, it has so many incredible things going for it. Not only is the story so vast and thought provoking, but the direction and cinematography is stunning. The effects are the best in any Sci-fi movie before and since. 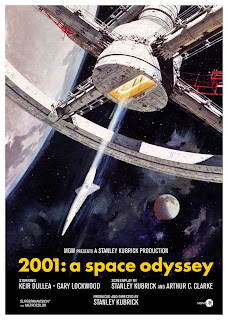 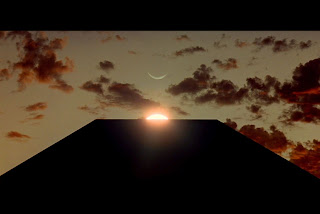 "2001" is a story of evolution. Sometime in the distant past, someone or something nudged evolution by placing a monolith on Earth (presumably elsewhere throughout the universe as well). Evolution then enabled humankind to reach the moon's surface, where yet another monolith is found, one that signals the monolith placers that humankind has evolved that far. Now a race begins between computers (HAL) and human (Bowman) to reach the monolith placers. The winner will achieve the next step in evolution, whatever that may be.Written by Larry Cousins 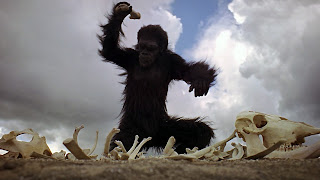 No big surprise there. I look at 2001 A Space Odyssey in so many different ways. The story is epic and mind blowing. It spans millions of years and delivers a classic origin of the human race plot that builds up to another major reveal that there is other life out there and that we are but children in the universe.

We have an amazing story telling process that harkens back to the movie Metropolis and its ability to tell a story with very little dialog. The story is simple but not something that is cut and dry. One wouldn’t be able to understand it if they were just half paying attention to it. 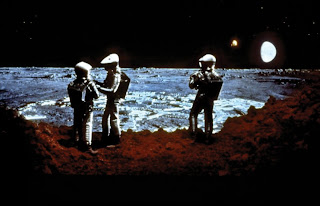 One of the biggest criticisms of the film is ‘it is boring’. Sure. The lack of dialog and explanations can certainly turn some people off. The pacing is certainly particular and slow but the development within the movie accounts for this. It is not a film for everyone. Looking for action and a more typical Hollywood clone then look elsewhere. One could argue that many art films have something about them that is hard for the general public to handle.

One cannot argue though that the special effects are groundbreaking. What they did to recreate zero gravity and the near future of 2001 was incredible. The fact that the effects hold up 40 years later is testament to the effects people including Douglas Trumbull as well as the visionaries Stanley Kubrick and Arthur C. Clarke.

The music is also epic in its classical selections but is not over used.  Still, the movies unnerving sound during the appearance of the Monolith during prehistoric time and later with Dave Bowman's trip through the larger Monolith fits well with the tone of the movie.

Kubrick was no stranger to making excellent films and pairing up with Clarke was a match made in heaven. 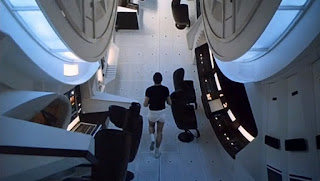 As mentioned in a previous review, the realism of the film stands out. The science is mostly accurate and one can almost see why people may have been bored, thinking the film resembled more a documentary than a regular fictional tale. The effects boost this realism with thoughts that Kubrick also directed and shot a ‘fake’ moon landing in 1969.

I don’t want to harp on the effects too much except that recently I viewed the movie on a 47” HD TV in Bluray and I was just blown away by the special effects. The detail is so amazing. 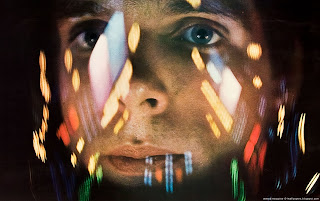 When there is dialog, the acting, especially by Keir Dullea and Gary Lockwood is stilted and dry. There is very little emotion. This contrasts the emotion of the primitive humans in prehistoric times. Mankind has become almost computer like and it is ironic that only prehistoric man and a super computer, Hal, show any kind of emotion. The film’s deliberate style of showing us the progression of man is interesting. We see technology at it best and yet the astronauts are virtually emotionless when using it. Frank Poole gets a birthday message and yet just stares at it as if he is a robot. 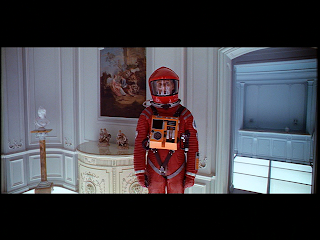 So what does the film mean? Well, this is what I like about the film. There is no clean cut answer. The cyclical evolution of mankind from birth to death and beyond, the interference of the Monolith, pushing mankind into their next journey, the loss of emotion – all can be seen in the movie and at no time can you fully understand it.

Now sure the novels and the sequel 2010 clear much up and so if you take those into consideration, you have your answers but for a movie by itself, 2001: A Space Odyssey is an enigma.

It seems every time I see the film, I discover something new. Not just the special effects mind you but ideas and interpretation seem to always refresh and change with every viewing.

The movie does not fall into the usual Hollywood standard. A remake today would probably have a larger cast arguing and discussing the meanings of the monolith and Hal’s malfunctions. In a way, 2010 did do this to a degree but was an excellent film in of its self. 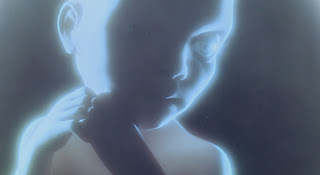 2001: A Space Odyssey is the definitive Sci-fi movie for many other reasons. The effects are reason enough to see it. The idea that mankind was manipulated by a higher force and that the human journey folds back upon itself is all great stuff for Sci-fi fans. We have a malfunction of a computer that truly believes it is doing the right thing or is at least being manipulated by someone. We have a glimpse at a potential future with space stations and commercial flights going into space. The wonder of space travel is on display in the most realistic way possible for a film not shot in outer space. Its all there for a Sci-Fi movie.

I first saw this movie on TV when I was first getting into Sci-Fi movies in the late 70's early 80's.

This was the first blu-ray I bought.