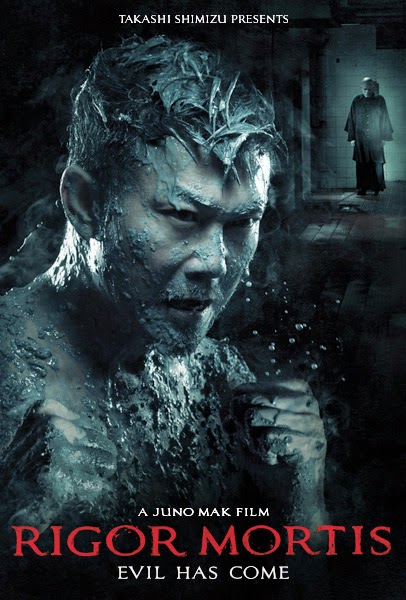 I used to be a big fan of Hong Kong horror films. I have fond memories of A Chinese Ghost Story, The Eye and Mr. Vampire but stopped following the genre after a time, until now. Rigor Mortis is a movie that is a reunion of sorts. With influences thanks to producer Takashi Shimizu (Ju-On -The Grudge) and starring various actors from the Mr. Vampire movie series, this new movie really seems to be a team up of talent and story all rolled into one pleasant package.  Some of the Asian horror favorites including the long haired ghost and the hopping vampire are put together into a film that does justice to those classic greats of the past.

A washed up actor, who played in horror films of the past, moves into a run down apartment complex and gets involved with ghosts, vampires and the men who hunt them. A woman's husband is becoming a vampire while the spirits of two girls haunt the premises appear to be two stories not really connected and at times I thought the film would never explain what was really going on. It eventually does and delivers a very
satisfying ending that answers most of those questions.

The film is peppered with some very strong elements including special effects, creepy imagery, atmosphere, crazy action and character drama. It is amazing how this movie is able to function with all of these pieces with such high quality. The movie certainly brought me back to the days when I would be watching the Hong Kong films for the first time. Rigor Mortis is exciting, funny and has that Hong Kong, Asian horror flavor that is so delightful compared to your standard Hollywood horror fare.

I was surprised by how each element hit its perspective mark.  The relationships between the actor and the boy, the woman and her husband etc are not over done but are touched upon just enough to allow viewers to understand the motivations of all involved.

The imagery is excellent from the cinematography of the setting to the effects of the ghosts.  A particular moment in the movie as three characters stand in a hallway, was blood chilling and never explained but very powerful nevertheless.

I confess that I was not aware of the actor reunion among the various Mr. Vampire cast in this movie but this makes the film even more meaningful in its hope to pay homage to the franchise and the horror genre in general. If you are a fan of those movies of the past you should find so much to love about Rigor Mortis. If you like horror films and want to see something different then give Rigor Mortis a chance and you might find yourself seeking out some of the other movies I mentioned.

I am not sure this film is intent on relaunching the genre but if it is, it is a great start.

The film is getting a limited release on June 6 in several cities in the U.S., with more release dates to follow. It is also being released On Demand.