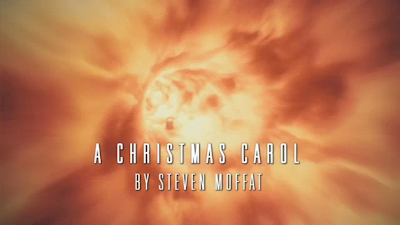 Doctor Who:
A Christmas Carol
By Steven Moffat

“I’m the ghost of Christmas past.”

It’s Christmas time once again and that means it time once again for another Doctor Who Yuletide special.    A Christmas Carol is the sixth Doctor Who Christmas special and the first not to be written by Russell T. Davies.   This time its Steven Moffat’s turn and you can tell the difference.   A Christmas Carol starts off with a bang as the Honeymoon ship that Amy and Rory are on is heading for a crash landing.  It’s up to the Doctor to save them and this time it won’t be by using cheap writer’s tricks like the sonic screwdriver or having the TARDIS put the ship in a tracker beam. 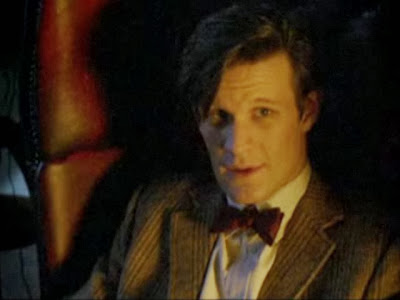 Instead we have the Doctor trying to convince an old heartless man to do the right thing and shut off his machine that controls the sky in order to save all the people on the crashing ship.   A task easier said than done and here is where the story really takes off and shines.  As you probably have guessed from the title of this episode A Christmas Carol is a take on the Charles Dickens classic.   I say a take because the story mainly deals with the past.   The Doctor tries to convince an old Kazran to be a better person by visiting him while he was a kid.    It’s at this point that we find out why Abigail was frozen and what she means to Kazran.  We also find out what makes Kazran a bitter and mean old man that won’t lift one arm to help anyone.   With the help of Amy and Kazrans younger self the Doctor does pull it off and gives us a happy Christmas ending. 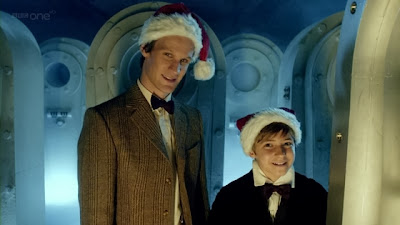 A Christmas Carol is by far the best of the Christmas Specials.    Steven Moffat has weaved a gem of a story that had a lot of emotion to it.  I really enjoyed this story as it was different from the Doctor Who stories we have seen before.   Instead of fighting aliens and monsters the Doctor goes up against a man that is Scrooge like.  I liked the Dickens influence of the story.  It was pretty clever to see the Doctor go back and interact with the young Kazran and have the old Kazran watch it all on the view screen of his digital recorder.

A Christmas Carol was a pretty solid story that had a good conclusion.  It did not have to revert to a reset button or any of RTD’s cheap resolutions.   A Christmas Carol had a true resolution that was quite shocking in away as I was not expecting to see.   I truly liked the scenes with Kazran and Abigail on all the Christmas Eves that they spent with each other and you could predict what makes Kazran an old and bitter person.  If there was one fault to this story it was the predictability of Abigail’s fate and the effect on Kazran.

Matt Smith has truly arrived as the Doctor as this is one of his finest performances.  You can surely tell that he is comfortable playing the Doctor now and will solidify himself as one of the greats to ever play the Doctor.   Michael Gambon was terrific as Kazran and the Harry Potter actor gave a performance that made you really dislike Kazran.  His scenes with Matt Smith were very powerful and some of the best since the show has returned.   It’s too bad that Amy and Rory were delegated to stay out of the way but this story would not have worked if the companions had a bigger role.  In all a very entertaining Christmas Special that is so far the best in 6 Christmas’s.
Grade A
Posted by DR5WHO at 10:42 AM