Details for Doctor Who - The Middle 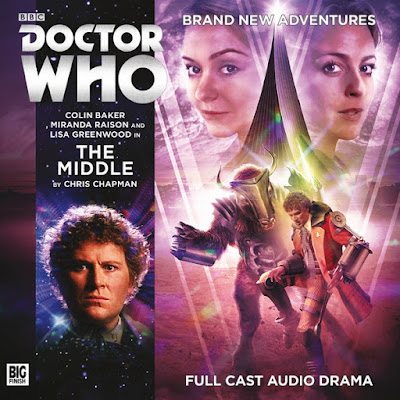 Out this month for the main range series is a 6th Doctor, Flip and Constance story and this tie they land on an alien planet where everything isn't what it seems.  You can order this release from the Big Finish website.
https://www.bigfinish.com/releases/v/the-middle-1262

It’s L/Wren Mrs Constance Clarke’s birthday - and Flip is determined to make it an anniversary to remember.

The futuristic colony of Formicia, where the pampered populace pass their days in endless leisure, seems the perfect place for a ‘Wren Party’. But all is not as it seems. Looking down from the Middle, the skyscraping tower that ascends as far as the colony ceiling, Formicia’s overseers can see that the Doctor doesn’t fit in - and it’s not just his coat that makes him conspicuous...

“The End is the Beginning,” say the propaganda-like posters all over Formicia. Because to be part of this perfect society comes at a price. And the Doctor's already in arrears.