Details for Doctor Who - The Morton Legacy 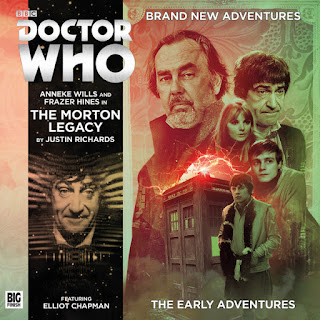 Out now from Big Finish is another adventure in The Early Adventures featuring the 2nd Doctor and his first Tardis crew Polly, Ben and Jamie.  This adventure takes place in London but not the London that Ben and Polly were expecting.  You can order this release from the Big Finish website.
https://www.bigfinish.com/releases/v/the-morton-legacy-1321

When the TARDIS lands in London, Ben and Polly are initially delighted to be back home… until they realise that they’re a hundred years too early. But this is nothing next to how the Doctor and Jamie feel when the TARDIS itself vanishes!

Their attempts to locate their ship lead them to an antiquarian, Josiah Morton, possessed of a most unusual collection that is currently subjected to a legal dispute. But they’re not the only people interested in him. Dangerous criminals watch from the shadows, waiting for a moment to strike. And the police are calling too - accusing him of murder.

An unusual series of deaths have been occurring across the capital, and all signs point to Morton as the culprit. But is he really a killer? Or is there something else at large in the city? Something… alien?