Details for Doctor Who - The Ingenious Gentleman Adric of Alzarius 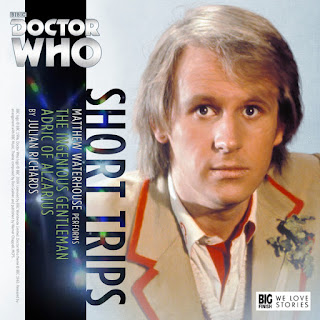 This months Short Trips adventure features the 5th Doctor and his original TARDIS crew.  This story is narrated by Mathew Waterhouse who played Adric during the Davison era.  You can get this download only release from the Big Finish website.
https://www.bigfinish.com/releases/v/the-ingenious-gentleman-adric-of-alzarius-1366

Release #35 is a Fifth Doctor, Adric, Nyssa and Tegan story.

Sir Keeyoht of la Koura, and his loyal squire Adric, are on a quest. A great and noble quest to stop that most vile of Enchanters, the Doctor, from claiming the greatest treasure in the land. Along the way they intend to battle giants (or possibly windmills), inspire adventurers, rescue a princess and ultimately come face to face with that most terrifying of all monsters, the Dragon.  Except Adric knows there are no such thing as Dragons...

Cast
Matthew Waterhouse (Narrator)
Posted by DR5WHO at 10:53 AM