Supernatural: Season 7, Time for a Wedding! - Review (some spoilers) 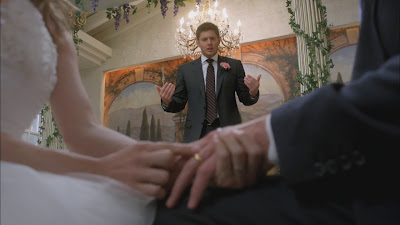 Sam is getting married but Dean is not too happy about it. Why not? Doesn't he want his brother to be happy? Oh, wait, this is Supernatural. Something is going on here and Dean will need to figure it out before a series of mysterious deaths catch up to the happy couple.

One of the most controversial things to happen in Supernatural a few years ago was the ongoing storyline in which Dean and Sam's adventures became fictional. This book series led to conventions, which the Winchesters were present as well as all kinds of questions. The author, Chuck Shurely is in reality a prophet. Anyhow, Sam and Dean had met one of their biggest fans a few years back and this fan, Becky, is now married to Sam.

A good ole deal with a demon is at work here but the deal is being worked with a loophole, endangering Becky. Sam, under a magical influence is oblivious to this until the potion runs out. All this brings Crowley out into the opening as well.

The self awareness that Supernatural undertakes with this (and the alternate reality where the Winchesters wound up in the 'real' world where their adventures are a TV series called Supernatural) is a tricky path. At times it is very funny but it can cheapen the show, making it less believable. Not taking itself seriously is fine but I can see how some fans may not like this. In this case it really is not that big of a deal as Becky fits right in as Sam's new partner.

The episode is pretty funny and again, has some good old school tastes with the crossroads demon. I am still liking the lack of Leviathans and that ongoing storyline.