The Rock vs. Monsters 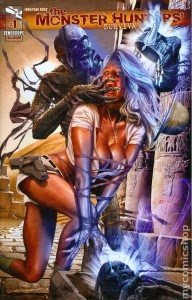 Wrestler-turned-actor Dwayne “The Rock” Johnson will star in a movie adaptation of the parody comic book series "The Monster Hunters’ Survival Guide.," according to sciencefiction.com.

The comic book series, published by Zenescope Comics, is “a comprehensive guide to hunt monsters, the undead and unnatural beasts, and survive the confrontations.”

No other details were available, including a timeline for the project. But it could be a while because Johnson currently is working on "G.I. Joe: Retaliation," and already has lined up roles in "Switch" and an adaptation of the Biblical "David and Goliath."
Posted by Harvey The Pooka at 10:42 AM