Has Torchwood Saved the Day For The Last Time 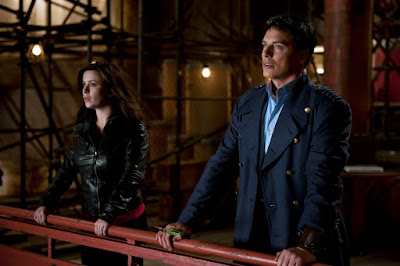 It's looking more and more likely that Gwen and Jack have saved the world for the last time.  In several interviews it has been hinted at that the show is in "Limbo".  John Barrowman has said

"We've pushed the pause button now because we don't know what's happening," Barrowman told RTÉ Ten. "I would love to do a new series and I will play Captain Jack as long as they want me to play Captain Jack."

"It's in limbo at the moment and beyond my control."

Julie Gardner who is one of the Executive Producers adds

There is talk of maybe bringing Torchwood to the big screen so we shall see what the future will bring but right now it is looking grim.
Posted by DR5WHO at 4:54 PM