Details on Doctor Who UNIT: Silenced 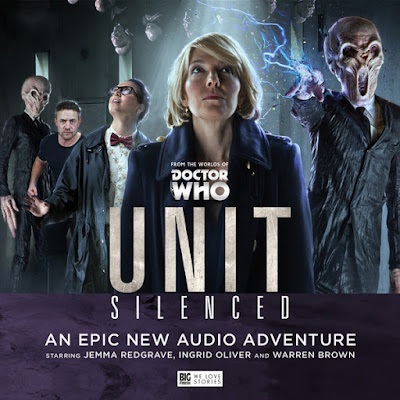 UNIT takes on The Silence in the new UNIT box set titled UNIT: Silenced.  This box set stars Jemma Redgrave and Ingrid Oliver as Kate Stewart and Osgood.  You can order this box set from the Big Finish website.
https://www.bigfinish.com/releases/v/unit---silenced-1210

Decades after their defeat by the Eleventh Doctor, the Silence prepare to rise against humanity....

There is no record of the presence of an alien species known as ‘The Silents’ on Earth. UNIT has never engaged hostiles capable of editing themselves from observers’ memories.

There is no evidence that such an opponent, if real, is regrouping and beginning a new plan of infiltration and manipulation.

Kate Stewart and her team are in no mortal danger. How can they be, when they don’t even know the enemy exists?

It’s business as usual at UNIT, and thankfully, Kate Stewart has no immediate threats to concern her. Or so she believes.

But when Sam Bishop returns from leave, he notices things aren’t quite as they seem. Soon he and Osgood are on the trail of an elusive enemy.

Meanwhile, Kenneth LeBlanc and his controversial political movement gather momentum, and one UNIT team member isn’t quite themselves...

Kenneth LeBlanc looks set to lead his party to national victory, overturning political opinion and taking the polls by storm. UNIT can only stand and watch as a silent revolution takes place.

But who are LeBlanc’s real backers? And what use to them is the triumph of a leader who seems to be nothing more than a liability?

The Silents are about to make the headlines.

When Sam Bishop and Osgood visit an orbiting space station for a routine mission, they have no idea that they are part of an alien scheme, years in the planning.

As the global situation spins out of control, Kate seeks help from an unlikely source.

The Silents are not done with humanity yet – and they will have their revenge.