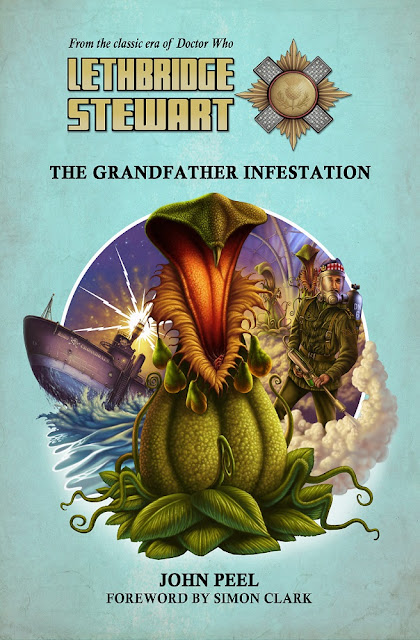 The Grandfather Infestation is the 7th book in the Lethbridge Stewart series and the first one that I have read.  For those of you that do not know Candy Jar Books have the rights to the characters of the Brigadier and Anne Travers and have continued with stories that take place between The Web of Fear and The Invasion in the Doctor Who Universe.  What you see in these books is the formation of UNIT before it becomes UNIT in The Invasion as the Brigadier is just in beginning stages with his new unit the Fifth Operational Corps which as you would expect does what UNIT would do against aliens.


The Grandfather Infestation is a pretty good science fiction book.  It is a thinking book rather than loaded with action in what is the norm today.  I really liked the buildup of this story from the capture of the pirate radio ship Radio Crossbones right down to when the Brigadier plans his rescue of those captured by the Ymir.  The book had some many different scenarios along the way like the navy sub being captured.  It was pretty interesting what happened to them as they were unwittingly captured by a superior force and was made to surrender by the more powerful rock like Ymir.

What was also pretty good in the story was the invasion and kidnapping of the locals that lived on Strommach Island.  The Grandfather’s are a plant like alien that I imagined look like a Triffid. What they did with the island of Strommach was plant their seedlings there so they could occupy and take over the Earth.  The whole island became a planting ground and it was up to the Brigadier to destroy them before he could make any attempt to save those in the underwater cavern that the Grandfathers are holed up in.  There is quite a bit of scenarios like this in The Grandfather Infestation that makes this book an interesting read and fun also. Another part of the book that I found fun, and sticking with the pirate radio theme, was that the chapters were song titles from the late 60’s.  I recognized most of them except two of them I had no clue who sang the song.

But be warned.  The Grandfather Infestation is a book that takes its time to get going and is character driven and that is why I enjoyed it so much.  I enjoyed the development of Mary and Al who were the only survivors of Radio Crossbones.  I was really interested to find out what would happen to them as they grew on you as they were very likeable and you were hoping they would make it out of the Ymir’s capture. Mary and Al were used to advance the story of the Ymir and the Grandfathers and what they wanted to do with the Earth.  Through them we learned more about the aliens and what made them tick.  It was a pretty good device to use as we had literally two stories going on with Mary and Al in the grips of the Ymir and the Brigadier and Anne Travers coming up with a plan to stop them but first they had to find their lair.  Both parts of the story were pretty good but I found Mary and Al’s story to be more interesting.