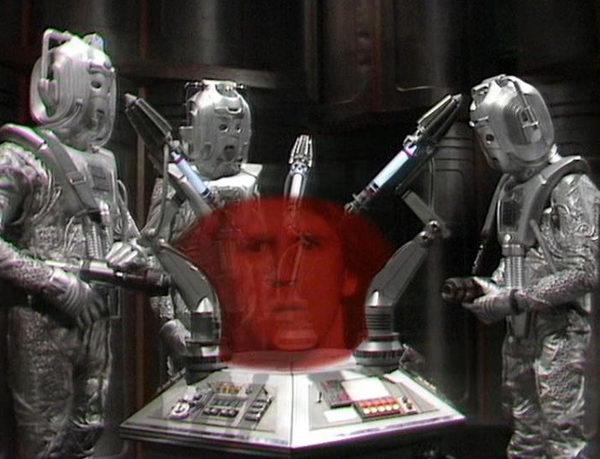 Doctor Who:
Earthshock
By Eric Saward

DOCTOR: Emotions have their uses.

CYBERLEADER: They restrict and curtail the intellect and logic of the mind.

DOCTOR: They also enhance life! When did you last have the pleasure of smelling a flower, watching a sunset, eating a well-prepared meal?

CYBERLEADER: These things are irrelevant.

DOCTOR: For some people, small, beautiful events is what life is all about!

The Doctor and Adric are having quite the argument.  Adric is tired of being teased and being considered an outsider and wants to go home.  The Doctor is furious over this as it would require going back into E – Space and through a CVE and would be really tricky if not disastrous.  So The Doctor materializes the TARDIS in an underground cave and decides to go outside and calm down leaving Adric to plot the course to his own destruction.

While looking at dinosaur fossils The Doctor, Nyssa and Tegan come across mining equipment and soon the military who are investigating an attack on the expedition that was working there.  Put there are problems as The Doctor is accused of killing the expedition and is trying to tell his side when the group is attacked by androids.   It appears these androids are the ones responsible for killing the expedition and a group of Lt. Scotts men.  They successfully destroy the Androids but realize that they were equipped with cameras and that whoever controls the androids knows what is going on. 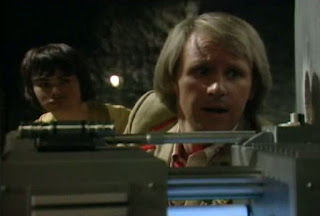 Then there is the case of the bomb.  The Doctor realizes that the bomb is extremely powerful and could destroy the Earth.  The Doctor tries to deactivate it but is being fought at every turn.  Once they finally succeed in deactivating the bomb The Doctor finds the source of the signal and heads off to deep space onto a cargo ship.  On that ship and unknown to those on board besides a traitor is an army.  What is more frightening is that the army is Cybermen and they are hell bent on destroying Earth and stopping the Cyberpact. The Doctor must save The Earth and his companions from The Cybermen and unfortunately he fails to do so.

Boom!!!!  That’s the last image we see of Adric at the end of Earthshock as he died trying to save the Earth.  A planet he has no ties to.  For once we see The Doctor powerless to save his companion.  Imagine what must have gone through the minds of Doctor Who fans back in 1982.  Don’t forget this was in the age that social network did not exist and no one knew what was happening.  So just imagine what fans thought when the companion was killed off. 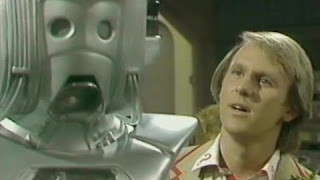 Earthshock was a story full of surprises.  It has that really cool cliffhanger reveal of who the true enemy really was.  The Cybermen make their triumphant return with a new look and new plan to cause The Doctor grief.  The Cybermen have not been seen since Revenge of the Cybermen back in 1975 the Cybermen were due for a return and for a facelift.  Filming of this story was so secretive as John Nathan – Turner wanted their return to be a surprised as he closed the public gallery and refused a Radio Times cover to keep The Cybermen’s return a surprise.

They were given a new sleeker look and their voices were more menacing. They also incorporated using androids to do their dirty work something they haven’t done before even though they have taken control of people’s minds before.   The new look was really cool as it made them look more sinister and not like robots as much.  You had the feel that humans were in there especially at the mouth area. 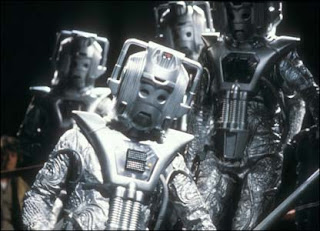 The story is a roller coaster of emotions as the Cyberleader really knows how to manipulate The Doctor.  He uses the Doctor’s compassion for humans and especially his friends that the inevitable death of Adric is that much more poignant.  When it happens you really get a sense of failure from The Doctor even though he stopped the Cybermen. 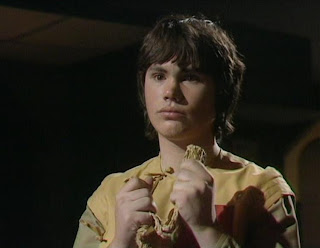 Earthshock is a story that brings back the Cybermen and uses them right.  I love the whole aspect of the story mainly due to the mystery that surrounds it.  For instance when it starts off on Earth you have no idea why there is a bomb and who the androids were guarding it for?  Plus why is the signal coming from deep space?  All great plot devices that work to a T in Earthshock.  Everything they did seemed to work to perfection in Earthshock and it stands the test of time because of it.  Earthshock is truly a classic and one that is truly amazing to watch over and over and plus it does have that horror feel to it as there are quite a bit behind the sofa moments. 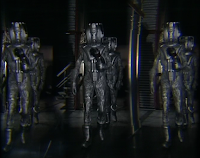 Earthshock has one of the best cliff hangers in Doctor Who’s history.  You all know it and it is a pretty awesome scene. It is the end of part 3 when the Cybermen are activated and burst out of the tubes. They then proceed to march toward the front of the spaceship with The Doctor looking on in horror at the view on the screen.  It is such a classic scene and a classic moment in Doctor Who’s history.  Earthshock is truly a story to be watched and enjoyed over and over.
Grade A