Doctor Who - Terror of the Vervoids Review 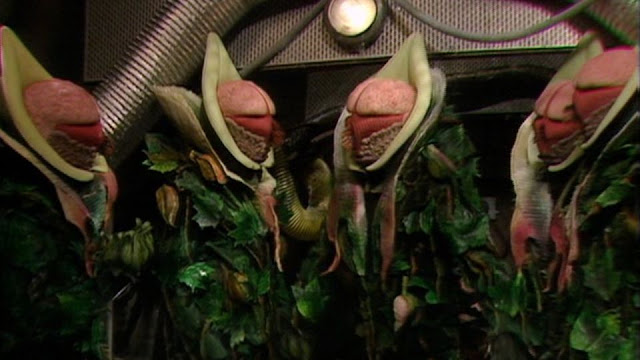 Doctor Who:
Terror of the Vervoids
By Pip and Jane Baker

VALEYARD: Whether or not the Doctor has proved himself innocent of meddling is no longer the cardinal issue before this court. He has proved himself guilty of a far greater crime.
INQUISITOR: You refer to Article Seven of Gallifreyan law?
DOCTOR: No, my lady, that cannot apply! Had a single Vervoid reached Earth, the human race would have been eliminated!
VALEYARD: Article seven permits no exceptions. The Doctor has destroyed a complete species. The charge must now be genocide.

The Doctor is now ready to present his case after a short time to mourn the death of Peri shows the court an adventure from his future.  The Doctor and new companion Mel respond to a distress signal from the Hyperion 3.  Apparently there is something sinister going on as a string of murders has taken place.  The Commodore is an old friend of The Doctor and lets him take charge of the investigation. 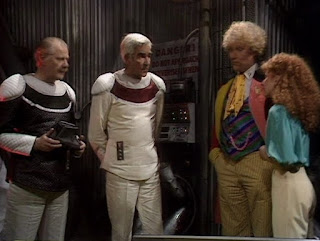 That is not the only strange occurrence going on as there appears to be some strange seed pods in the cargo deck.   In fact the pods are big enough for a human to fit in them.  Mel wanted to see them but is stopped by a member of the crew who decides to show her the pods.  He proceeds to open the gate when he is electrocuted and that bright light has brought to life the creatures inside the pods.  Now more people have started to disappear and and there are leaves being left at the scene.  The Doctor now has two mysteries and the task of saving everyone on the ship and preventing the Vervoids from getting to Earth and killing the entire population. 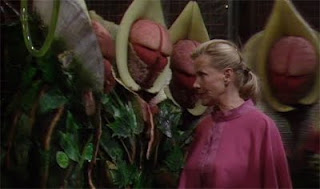 I like the fact that there are two things going on.  First there is the murder mystery as passengers and crew is dropping like flies.  There is someone up to something and with The Doctor on board it has really mucked their plans.  Then there is Professor Lasky and her crew and the pods they have on board which turns out to be inhabited by the villainous Vervoids  who hate humans with a passion and the proceed to  killing everyone on the ship also.

I liked the Vervoids as they were malicious and did not ally or try to bargin with the humans at all.  They even killed the scientists that were trying to help them as they ended up killing them also.  What was funny was they also killed the hybrid human Vervoid that was turning into one of them.  The plant like Vervoids were one of the better looking aliens of the Eighties as their plant like features made them a tad scary especially when they popped out of nowhere. 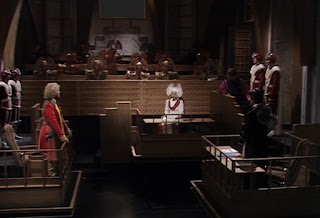 Terror of the Vervoids has the dubious distinction of being the first story for Mel.  Mel ends up being one of the more annoying companions of all time.  For one she screams at everything no matter how trivial the threat may be.  Plus Mel is annoying in her mannerisms as they made her not so bright it would seem as she often gets into trouble and acts without thinking.  Did I mention the screaming?  The chemistry is there with Colin Baker and it is unfortunate that the two of them did not have more time together as there was not much chemistry with Sylvester McCoy.

The trial scene ended Terror of the Vervoids with a pretty good twist as it would appear that The Doctor did not help his cause but hurt it.  The Valeyard added the charge of genocide as it would appear The Doctor killed the last of The Vervoids.  This was a good twist to the trial proceedings as they had started to become pretty boring as they appeared to be just a bunch of bickering matches between The Doctor and The Valeyard and that was getting old and boring to watch.