Doctor Who - Revenge of the Cybermen Review 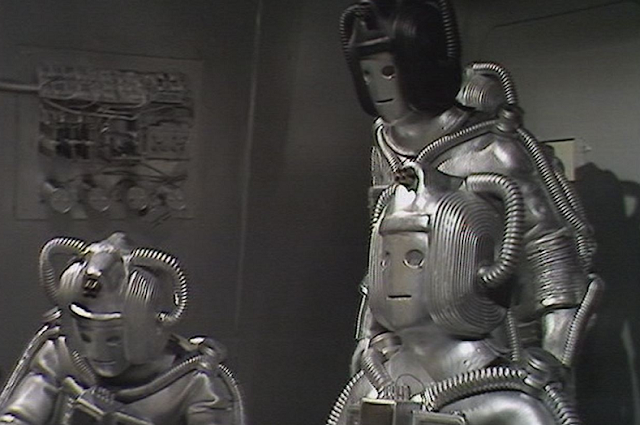 
Doctor Who:
Revenge of the Cybermen
By Gerry Davis

“You've no home planet, no influence, nothing. You're just a pathetic bunch of tin soldiers skulking about the galaxy in an ancient spaceship.”

Using the time ring to meetup with the TARDIS at Nerva Beacon The Doctor, Sarah and Harry have discovered that the TARDIS is not there and that this is not the Nerva Beacon they left earlier.  In fact it is a beacon that is not even in orbit around Earth at all. In fact it is in orbit around what looks like an asteroid that has been floating in space and caught in Jupiter’s gravity.  As the three travelers decide to leave the control room a dead body falls through the door they were going through.  In fact it appears there are dead people all over the beacon and they appear to have died from a plague.

They are eventually captured by the remaining members of the crew and have been briefed on what going on by Commander Stevenson and it all seems to have started a few weeks ago.  When they hear another crew member scream they discover that he has the plague and The Doctor discovers that the man does not have the plague but has been bitten by something and is dying from the poison.  The Doctor discovers that Kellerman isn’t all he appears to be and then realizes that the asteroid is in fact Voga the planet of gold.  Things are coming into focus especially after Sarah Jane is bitten by what is discovered to be a Cybermat the creature that the Cybermen use to soften up the station for an invasion.  The Cybermen want to destroy Voga and the Vogans want to destroy the Cybermen and The Doctor, Sarah and Harry are stuck in the middle trying to make sure the Cybermen are stopped and that Voga and the beacon do not get destroyed. 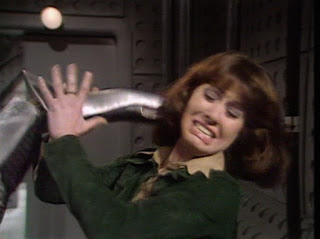 Revenge of the Cybermen heralds the long return of the Cybermen to Doctor Who after a five year absence.  Last seen in the Invasion the Cybermen keep some of the designs from that type of Cybermen but with a different helmet that actually acts as their gun and the tubes on their arms and legs are different also but mostly the look similar to their Invasion counterparts.  There are only a small crew of Cybermen in this story as most of the time we only three Cybermen most of the time and we only see them for the first time at the end of episode two.

If there is a negative about Revenge of the Cybermen, and there quite a few, is that they are not featured in this story that much and they don’t seem to do much except walk around shooting their forehead guns and standing around looking menacing.  While the Cybermen stories of the 60’s the Cybermen were scary and actually appeared menacing as the walked around bases picking people off on by one or putting them under mind control.  They also had better plans than the one in Revenge of the Cybermen.  I wasn’t that enamored with having The Doctor, Commander Stevenson and Lester walking to the middle of the planet with bombs strapped to them.  It just wasn’t all that convincing.  In fact the Cyberman plan to fill Nerva Beacon with bombs and then crashing it into Voga was a better idea.   Plus I believe that the Cybermen are the only ones that sound like they come from England.  Up until this point the Cybermen had robotic sounding voices. Not the ones in Revenge of the Cybermen as they didn’t try to disguise the voice and it sounded like they were talking through a mask and in reality they were and that ruined the illusion of it all for me. 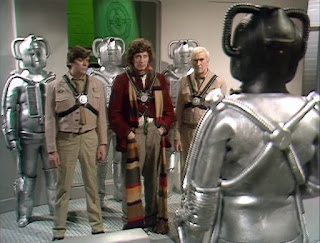 Revenge of the Cybermen did have some good moments. I liked watching the power struggle between Vorus and Tynum.  Vorus wanted to destroy the Cybermen once and for all with his rocket so they can return to the surface while Tynum wanted to just leave things as they were since the end of the Cyberwar.  You can see both arguments and the positives and negatives between them but in reality Tynum was right because the Cybermen will never be fully destroyed and will always be a threat.

I did not like the revelation of gold being the weakness of the Cybermen.  We learn that goldust used in a glitter gun will clog up the Cybermens chest units in essence suffocating them.  This made the Cybermen in future stories pretty weak as all The Doctor and companions did was use some gold to stop the Cybermen and it made for any easy out for the writers.  The once powerful Cybermen defeated by gold and of course there happens to be a planet of gold in this story which must be ultimately destroyed.  I am not a fan of the gold weakness and I am glad they did away with it in the new series. 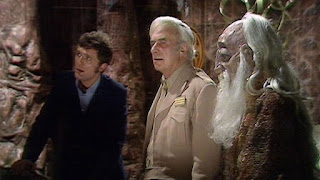 Revenge of the Cybermen is not the worst Cybermen story in Doctor who that would be Silver Nemesis.  But it isn’t that far off from being the worst.  What saves this story is Tom Baker and his performance as the 4th Doctor.  This story is the last story of Season 12 which is in fact Tom Bakers first season and by this point he has firmly got his hands on the part and has cemented his version of The Doctor.  He seems more relaxed and comfortable playing The Doctor and you can tell that he is really making his presence felt.  You see a Doctor that you can believe will save the day and is on that truly cares for his companions.  Ok, well, Sarah Jane I’m not so sure he was all that fond of Harry.  For Cyberman fans this story is one that you can more or less skip but why would you as the Cybermen are a pretty cool enemy and Revenge of the Cybermen is a pretty good story to enjoy in a guilty pleasure kind of way.
Grade C