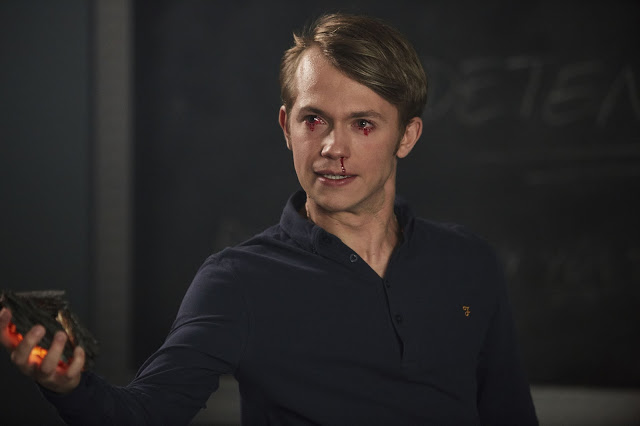 Miss Quill has put Charlie, Ram, Tanya, April and Matteusz in detention while she goes out and takes care of other matters.  While trying to use a spare key to escape their fate an asteroid comes through the rift and enters the classroom transporting it to a void that is not in any place in time and space.   The problem with this piece of the asteroid is that it feeds of the  negative feelings of the person holding it and thus makes you reveal your true feelings about your friends.

The thing about holding the meteor is that you can only hold it for a little bit of time before it consumes you.  Charlie finds out that the meteor is holding the essence of an alien murder and that they all have been transported to its prison.  They all discover that they are trapped in this prison and they only way they can figure out to get out is to hold the meteor and ask it questions but in doing so they reveal more of themselves than they really want to. 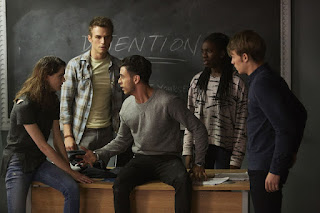 Detained should have been titled Awkward as I’m sure Charlie, Ram, Tanya, April and Matteusz did not want their true feelings to get out about their friends and this makes you wonder how they will be able to get on going forward.   I liked the fact that they did not hold back in revealing their feelings and that it wasn’t all rainbows and unicorns as there was some pretty serious complaints being shared by everyone.  I really enjoyed this as it really build on the characters more and we find out that they are really flawed people and now we know that they don’t really like each other much.  Poor Ram seems to have gotten the worst as he found out that April doesn’t love him as much as he loves her.

I really liked the claustrophobia feel to this story and the way they got on everyone’s nerves.  I also liked the way Charlie developed into more of solid character instead of the naïve nitwit he has been.  In fact I’m glad they actually had Charlie do something besides standing around as he was the one that actually saves the day.  But the mystery still is there for us to find out why Charlie is worse than the murder that was trapped in the meteor and was able to defeat him. I like this side of Charlie to finally see him do something and to add some mystery to him still. 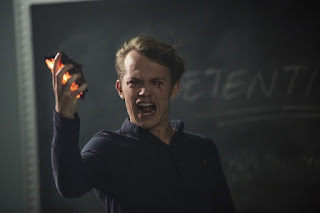 Detained seems to be the first part of a two part story as we saw what happened to the kids but we do not know what Miss Quill got up to.  We find out in the closing moments that she had the Arn removed and gained her freedom which allows her to operate her gun once again.  This was a pretty big development as it adds another wrinkle to what is going on and does that mean that Miss Quill will now try and kill Charlie?  Or will she use her new freedom to do what she wants to force Charlie in using the cabinet to kill the Shadow Kin?  I guess we’ll find out in episode 8 as next week we see what Miss Quill was up to why’ll they were stuck in that limbo jail.  In all Detained was a pretty simple story that was pretty good as we get to know the characters of Class better.
Grade B+