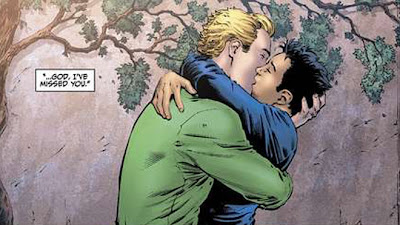 The Golden Age Green Lantern Alan Scott who stars in the DC Comic Earth 2 a reboot of the golden age super heroes who are now in their twenties will be revealed in next weeks issue as being gay.


"He's very much the character he was. He's still the pinnacle of bravery and idealism. He's also gay,"

Earth 2 is written by James Robinson and it was pretty much a mutual decision between him and DC to make Alan Scott gay. You can read the full interview at this link.
http://www.nypost.com/p/news/national/dc_comics_green_lantern_to_be_revealed_Yt2uNktuzmrrWSbkIRIDbO#ixzz1wXkARBFK