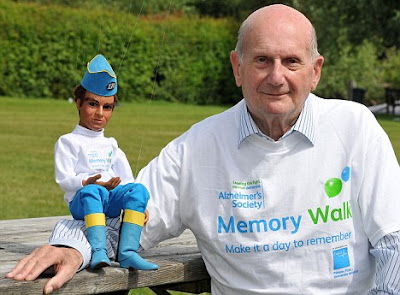 Recently TV producer Gerry Anderson was diagnosed with Dementia. The creator of Thunderbirds, Captain Scarlet, UFO and Space: 1999 found himself lost during a short car ride a few months back.  At age 83, Gerry Anderson is still very active and had been working on a couple of ideas for TV shows.  He now must rely on family to drive him around.

Anderson spoke at an Alzheimer's event entitled Memory Walk and mentioned how he wished he had been diagnosed earlier so treatment could have started earlier.

Gerry Anderson is my personal favorite TV producer and my thoughts and prayers go out to him and his family.