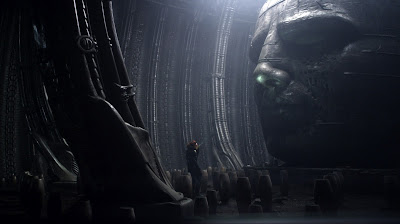 As to be expected, Ridley Scott is talking about an extended edition on the Home video release.  I wouldn't expect to see too many of the problems of the film to be repaired by this version but hopefully some of the highlights of the film will be enhanced.

There is also a new viral movie online that may point to a 10-11-12 release date on Home Video - or not.  That is a Thursday and rarely do releases happen then.  Perhaps an announcement of a sequel will happen on that date.


Or it could have been an outtake that accidentally got online!
Posted by SHADOKP at 1:55 PM