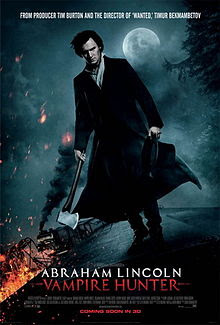 When I went to purchase my ticket for Abraham Lincoln – Vampire Hunter I had a wave of “This is ridiculous” waft over me. Am I really going to see this film. I understand it is a popular book and it has its fans but am I really seeing a film like this? I then shook off that feeling and went make to my movie fan personae. I was about ready to see an alternate reality type historical movie with plenty of action and gore. I would also see director Timur Bekmambetov and his masterful use of slow motion and visuals to tell this unbelievable story.


The story itself is surprisingly well done and has plenty of heart. We see the early years of Lincoln as a boy and the events that drive him to seek revenge on one particular bloodsucking freak. He is trained by a Vampire Hunter, Henry Sturgess (Dominic Cooper) and learned how to fight using various weapons including Abe's trusty axe. Lincoln, played by Benjamin Walker, begins taking care of vampires in Chicago, working his way up to carry out his revenge. Along the way he meets Mary Todd (Mary Elizabeth Winstead) and other friends. It is learned that the vampires have taken over the south and Lincoln extends his revenge to put a stop to their plans to take over America. Lincoln rises through the political system and soon commands the Civil War as President of the United States.  It is also interesting how the story of the vampires are woven into the real events of the Civil War;.

The story moves at a pretty good pace, really glossing over much of Lincoln's rise to the presidency. More time is spent in his time meeting his future wife and interacting with his friends. The story is constantly peppered with vampire hunts and fights and so the story is not simply a biopic. It is an action film with just enough character work to get by.

The story gets touching when a personal tragedy fuels Lincoln even more to wipe out the vampires and win the Civil War once and for all. An elaborate plan to do this is in danger of failing as the head vampire, Adam (Rufus Sewell) uses inside information to thwart the plan.

While the pacing is excellent and the touching moments are moving, the film is framed in a way that only director Timur Bekmambetov can do and make it a beautiful work or art. Slow motion gets a bad rap in cinema of late, with many complaining of its overuse but Timur uses it to punctuate the action as well as stylize the look of the film. Two key scenes of the film are extraordinarily shot and include the horse stampede fight and the train fight. Both are incredible action scenes in the over the top way out method of Bekmambetov's action scenes of the past. Both are beautifully lit, shot and choreographed. The whole film has minor examples of this throughout.

I enjoyed the film immensely. I love the type of action and visuals the director puts in his film. His previous films like Wanted, Night Watch and Day Watch are examples of this type of film making. The action visualizes the characters in an almost superhero type level of agility and strength and indeed all of these films mentioned are, to a degree, superhero films.

If you find this type of action too much and/or you feel that the concept that Abraham Lincoln was a Vampire Hunter to ridiculous then perhaps you should skip this. But if you like action films and want to see Abe Lincoln kick vampire ass then check it out.
Posted by SHADOKP at 11:13 AM