Where no con has gone before ...

I just made that up. Like it? I was thinking about my weekend visit to Philadelphia Comic Con. Among the headlining attractions - appearing for the first time anywhere at the same time were all five "Star Trek" television series captains, including William Shatner (James T. Kirk of "Star Trek"), Patrick Stewart (Jean Luc Picard of "The Next Generation"), Avery Brooks (Benjamin Sisko of "Deep Space Nine"), Kate Mulgrew (Kathryn Janeway of "Voyager") and Scott Bakula (Jonathan Archer of "Enterprise").


And they really were in the same place at the same time - neatly lined up for autographs on Saturday morning. Photography in the immediate vicinity was - ahem! - discouraged, so we cannot share that exact historic moment with you with a picture. Instead, we borrowed a Wizard World photograph from the TrekMovie.com website. We can tell you that the actors that we sought out to complete our collection of captain autographs - Bakula, Mulgrew and Brooks - were cordial, warmly greeting each fan and trading a moment or two of conversation while signing. From what we could tell, Stewart and Shatner did likewise, although we understand Stewart did not shake hands due to an arthritic condition. Unintentionally making up for it was Brooks, who shook hands before and after signing each piece of memorabilia. And, yes, we did see at least one fan presenting Brooks with a baseball to sign.

The blaring Living Colour music and loud cheers may have caught some of the sci-fi crowd off-guard, but fans of professional wrestling knew they were about to witness the appearance of straight-edge superstar CM Punk of the WWE. Make no mistake about it - the Chicago native stole the show when it came to crowd reaction - and the longest autograph line, by far. We did manage to snap a photo of him, despite the ban, by hoisting a small child onto our shoulders. But please don't tell Punk - seriously, his "Go To Sleep" finishing move looks painful.

Our most expensive guilty pleasure of the weekend was securing a VIP pass for actor Bruce Campbell. And he did not disappoint, as judged by this conversation as he signed a photo from "Evil Dead."

Bruce: What do you do for a living?
Me: I'm a newspaper editor.
Bruce: Oh, do they still make those things? 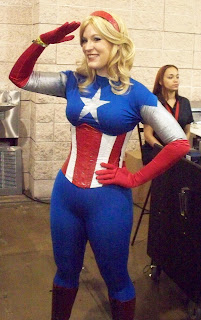 Give Campbell credit for one other thing - he showed up on time (well, within a few minutes). If I had one gripe from the day, it was that The Five Captains made fans wait about a half-hour past the appointed time for their joint signing. That's a lot of standing around when your group includes someone approaching his mid-50s, a person recovering from a cortisone shot to his knee and a child whose attention span could only be diverted by playing solitaire on an iPhone. On the bright side, it did allow for conversations with other fans, including a woman whose ticket was a birthday present from her son and someone who made us feel old by mentioning that "Deep Space Nine" is the "Trek" show that he grew up on.

We've barely scratched the surface of this con. Among the other stars were a pair of gods (Chris Hemsworth, Thor from "The Avengers" and Stan Lee, creator of countless legendary comic book characters), classic stars (Dean Cain from "The Adventures of Lois and Clark" and Lou Ferrigno from "The Incredible Hulk") and many, many more.

And, like any convention, the event was enlivened by the creative talents of the people in attendance and their costumes. A few examples are on this page. 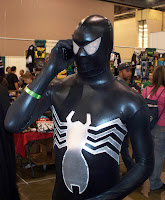 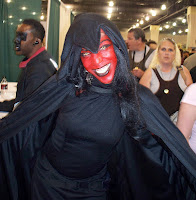 All in all, Philadelphia Comic Con was a wonderful, fan-friendly experience. We're already looking forward to next year, thanks to the folks at Wizard World.

Posted by Harvey The Pooka at 8:27 PM