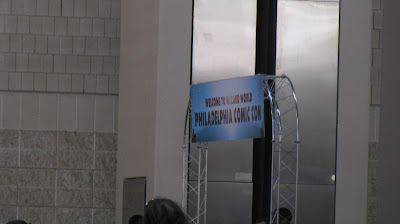 It is that time again.  Once again it’s time to make the annual pilgrimage to Philadelphia for Wizard World Philly.  This year my group was supposed to go for 2 days.  Well that was the plan.

Friday was a complete nightmare.  What should have been a 3 ½ hour ride took at least 7 hours.  It was insane.  Accident after accident accord all at once it seemed.  Like a well-orchestrated symphony playing Mozart to a crowded concert hall.  I blame this bad luck on 1010 New York who reported that it was clear sailing to New Jersey.  Well maybe they should get their eyes checked because the only clear sailing to New Jersey must have been on a boat crossing the Hudson.

The Jersey Turnpike was no pleasure ride either.  It was more like one of those driving school videos that show you what not to do while driving a motor vehicle.  Like for instance this guy who drove his dump truck onto the guard rail. I’m sure there was a good reason he crashed up there. Probably some moron cut him off while driving like the Stig. 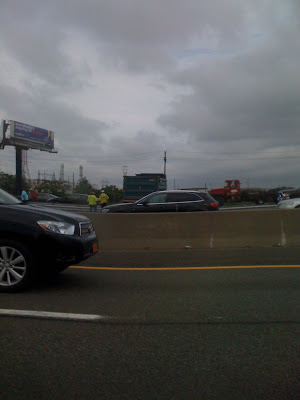 Needless to say we never made it to the convention on Friday.  Deeply disappointed and greatly bummed we proceeded to do what any normal person would do.  We went to supper and stuffed our gourd on food that will most likely make our waist lines bigger.
So Saturday arrived and we started off bright and early to do what one does at a convention.  Well that’s stand in line of course. Stand in line we did indeed.  In the end all the standing in line was worth it.  Especially when the reason for going to this show, definitely going through hell to get here, was to see for the first time ever all five Star Trek Captains together.  What a thrill that was.  I had already seen William Shatner so I needed to get the other four Captains autographs.  Another great thrill was getting Patrick Stewart’s autograph with my son.  Curt was so in awe of seeing Captain Picard in person.  The best part was that Patrick Stewart personalized it for Curt.

Having spent most of the morning in line waiting for the Captains to finally make their way out to meet the hordes of fans we decided to get lunch. But first we made a stop to see Kai Owen.  Kai Owen is of course from Torchwood and plays Gwen’s husband Rhys.  It was pretty cool to see him and talk about Torchwood. We also stopped by Jeremy Bulloch’s table.  For those who don’t know he played Boba Fett in the original Star Wars Trilogy.  He signed a photo for my son and he also talked to me for a bit.  It appears that he remembers me from ICON 31.

Next up was Bruce Campbell.  We stood or sat in his line waiting for him to show up.  It wasn’t bad waiting in his line as it gave us time to digest our lunch and get a rest from all the walking around we did.  The best thing about waiting for Bruce Campbell was that he was on time.  Yes on time give a few minutes but still a whole lot earlier than the Five Captains.  It was great to finally see him after so many attempts.  His line flew as he made a brief conversation and signed pretty quickly.  I got a still of him from The Evil Dead for him to sign.

What was most extraordinary being at a convention with The Five Captains, Bruce Campbell, and Thor himself Chris Hemsworth was that they did not have the biggest autograph line.  That honor goes to the WWE Champion C.M Punk.  Yes a wrestler had the biggest line at Wizard World Philly.  That’s hard to believe with all the geek attractions that were there.  Guess when you call yourself the best wrestler in the world it also means you have the most fans that want to see you.  It is kind a funny though seeing the uninitiated walking around and wondering what all the hub bub was about a tattooed guy with a big gold diamond encrusted championship belt. Well it was clobbering time.

Wizard World Philly was a great time had by all after a near disastrous beginning. The only true complaint I had with the convention was that they were really strict about taking pictures of the guests.  Even from afar they swooped down upon you like vultures that are fighting for road kill scraps. The reason people come to conventions is to see and meet celebrities they are a fan of.  To deprive the fans from taking home a photo of their favorite star is sad in a way.  But that aside, the three of us all had a great time and are already planning on attending again next year.

Enjoy some of these photos from Wizard World Philly.