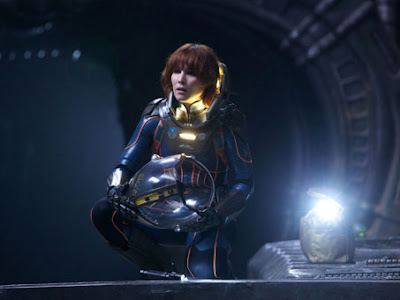 Let me start by saying that Prometheus is the movie I have had the highest expectations for in years. I knew The Avengers was going to be a certain caliber and certainly lived up to my hopes but Prometheus is one of those movies I wanted to absolutely love and cherish. When you have a hard Sci-Fi movie with Ridley Scott invovled, throw in connections to one of the greatest films of all time, Alien, and you have the ingredients of something special.

With those expectations one has to think that the film is destined to disappoint. 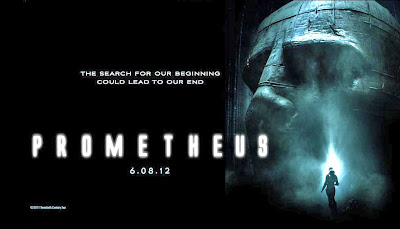 The film has so many good things but it is littered with bad things as well. First off, let me address the whole Alien prequel thing. If the movie had just a few things changed in the story, it could have been a stand alone story. For the most part it is. The connections though are obvious, from the Weyland Corporation to the signature Alien music to the ship and finally our glimpse at the end of an alien. Other little things throughout including dialog, carvings and so forth will also remind viewers of Alien and Aliens.  I also love how the film  links up to some of the work of H.R. Giger and his original concepts of the Alien.

I believe this connection to these movies may be clouding people's perception of the movie. It was hard to view the film and not see these connections and in my case especially, not compare this film to both Alien and Aliens. I was less concerned with the connection story wise. I was more interested in seeing a tight well acted story.

So let's tackle the good and the bad. Here again are comparisons, probably unfair ones at that. The acting in Prometheus bordered on being bad. That might have had something to do with some poor dialog and confusing character motive. I mention character motives because numerous times characters did things that seemed so unrealistic. Why would someone taunt an alien snake thing? Why would two crew members just except their suicide while stopping the alien ship from leaving? Why would no one question Dr. Shaw about her bloody and surgical scarred appearance?

I am sorry but Alien and Aliens both are examples on how to develop and work with characters in a movie. By the time the movies were at their half way points, we knew characters such as Brett, Ripley, Parker, Hicks, Hudson and Burke. In Prometheus the characters were less defined by a long shot. Beyond Dr. Shaw and David, it is very hard to grasp the others. Part of that was screen time but most of that was a script allowing them to have a cohesive part in the events of the movie.

I absolutely love when Sci-Fi films leave with unanswered questions for the viewer to ponder. In this case there are so many unanswered questions about the Engineers and their origin. Why did they get involved in the human race and why then did they plan to destroy them (if that is what their intention really is). Those questions are fine. Why were their no contamination protocols for the Prometheus mission? People just went around touching things, breathing the air and so on – it just seemed like a amateurish act all around. Why did the Engineer travel to the escape pod? Did it really need to kill Dr. Shaw? Were there more Engineers on the other ships? If so, would a broken android and Dr. Shaw have trouble taking it over?

Okay, let's move on to some good. The movie looks great. Ridley Scott usually delivers beautiful movies and this is no exception. The look of the film perhaps lacks the punch of Blade Runner and Alien, but it still has a crisp and realistic feel to it.

Two personal notes here – first off, I saw the film in 3-D and while there were some excellent shots – the HUD POVs and the tunnel long shots, for the most part the 3-D was a non factor. It wasn't utilized poorly by any stretch but I wasn't blown away by it (of course I am not a big fan of 3-D). Also, the sound of the film was pretty fantastic, or so I am guessing. Either our theater's speakers were blown or the soundtrack for Prometheus was just too much for it, but every loud sound created an annoying popping sound. One of my viewing group says it sounded like someone was clapping behind us. This detracted me from the movie to a degree.

Back to the story. The plot was fairly close to what I thought it was going to be. When all said and done I am slightly surprised that the film resembles my top movie of all time – 2001: A Space Odyssey! An alien race goes to Earth and manipulates life on the planet, forever shaping the human race. The aliens leave a map for the humans to travel to once they are able. The humans send a ship, complete with an onboard computer and a crew member named David. A secret agenda is in place that makes the crew members expendable.

I love stories like this and Prometheus is no exception. The idea is great and the bigger questions are what makes the film for me. Filtering out some of issues mentioned earlier, this film has an incredible scope that is epic and wonderful. I feel I want to grasp onto these elements, because they are more important, but feel the movie could have spent a few more precious screen time amping up these ideas and spending less time somewhere else. This may be contradicting to a level since I also feel the characters were short changed to a degree but if one had to be sacrificed, the characters, who weren't all that interesting anyway, should have been left behind. The only ones of importance were Shaw and David and they were handled well. Hats off to Noomi Rapace for a superb performance as a woman who must struggle with her faith.

So I certainly recommend this film, especially for the big screen viewing. I think it meets some of my expectations and is a good film overall. My high expectations and the films weaknesses combine to keep this film from the greatness I had hoped and while I now accept this, I eagerly await to see it again and see if the weaknesses outweigh the excellence. 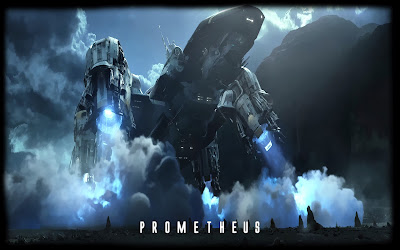