The Moff on Series 7 of Dr Who 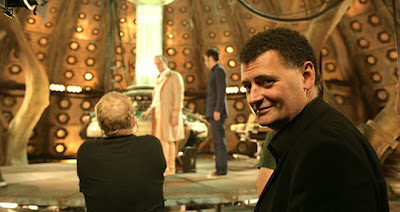 
The big thing is, nothing in the next run is starting out as a two-parter," he confirms in the latest issue of Doctor Who Magazine. "At this stage, everything is a single episode, and the only reason anything will become a two-parter is if we think it needs to be; not so much that the story is too long for 45 minutes, because nothing is too long for 45 minutes, but if it feels as though there are two distinct stages to the story.... I want to be able to say, every week, we've got a big standalone blockbuster, and then a trailer that makes it look like nothing compared to what's going to happen next week! That's the form for next year.

He then goes on about the cliffhangers and such and what he wants to open the season with.


"This year, we used a lot of cliffhangers and mysteries to pull people through, but then I remember the moment, at the end of A Good Man Goes to War, when we put up the title Let's Kill Hitler. That was so exciting. I'm thinking, ‘Can we do that every week?' You can sod off with poetic understatement. I want slutty titles and movie-poster plots. I want big pictures and straplines. The first episode I'm writing is called [Spoiler] of the [Spoilers]. And it'll feel a bit like Die Hard, that first episode. Everyone is expecting us to do another year like 2011. You're not going to get that at all. You're going to get the biggest, maddest set of episodes ever."