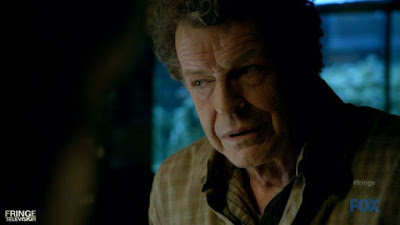 With seven episodes aired and a return to TV on January 13 it is time to take a look at Fringe so far this season.  The series continues to change and evolve with its parallel Universe plot line.  This year we found out what happened to Peter Bishop.  Bishop ceased to exist last season due to the Observers taking him out of time.  Somehow Peter manages to get back but in this new world in which he still doesn’t exist.  Now he must convince the Fringe team to work on getting him back to ‘his’ reality. 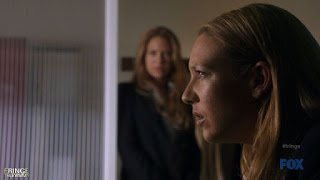 One of the things this show does often is mess with chemistry.  Just when Olivia and Peter seem to be getting close, an alternate Olivia takes the place of our Olivia.  Now back together again, Olivia begins to start up the relationship again only to have Peter cease to exist.  The relationships with Peter have all gone away and so we have a reboot of sorts.

So far this season has been pretty good with Lincoln Lee being brought onboard as a new Fringe member.  His character is known to us from the alternate Universe and in this one he is slowly developing a relationship with Olivia.  The individual stories have been pretty good with a fairly standard Fringe event a week format.  Some cases and situations we have already dealt with in the past are present in this ‘new’ alternate reality like the shape shifters.  The minor changes with this Universe are interesting as very little is different but enough to shake things up a bit. 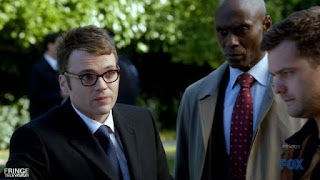 Most of the episodes this season were good with “And Those We Left Behind” and “One Night in October” as being stand outs for me.  Dealing with temporal shifts and a serial killer in respective episodes, the stories are just as interesting as they usually are.  Add in the tension with Peter Bishop and the even more unpredictable Walter Bishop and you have some good stuff here. 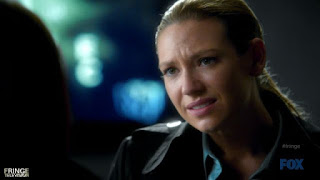 One has to wonder where this season is heading.  The cliffhanger shows that Nina Sharp is not as trustworthy as her alternate self in “our” Universe, if that is at all possible.  One can only guess that the Observers play more of a role (as seen in the trailer) and that Peter interacts with the alternate Universe and Walternate.

Fringe Mid Season Grade – B-
Posted by SHADOKP at 1:45 PM