How did Terra Nova's first season do in my opinion.  With a short 13 episode season just finished this week, where does this show go from here? 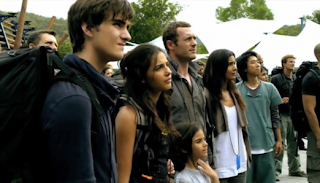 The series, in my opinion has its ups and downs with some incredible stories scattered around.  Case and point the final episode that really hit the mark on all levels.  With that two hour finale in mind I feel compelled to like this show a lot and in a similar way to The Walking Dead, the ending seems to make the rest of the season worth it.  Overall I have to give this a good grade for impressing me during its first and last episodes as well as being interesting enough to keep me watching.  Some of the characters are compelling and while the family mini sub plots can be highly unoriginal and boring at times, there is enough reason to keep watching. 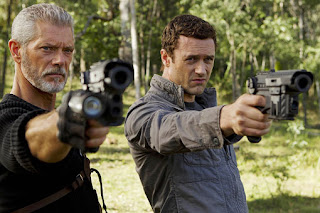 I was hoping for a dinosaur series but really they are just a back drop and its more about the characters as it should be I guess.

The final episode ends well without any major cliffhangers but certainly a new direction to go in as everything has changed.  Seemingly cut off from the future and with new secrets in the , I am more excited for this show than I was a week ago.

The series is expensive to do and has gotten okay ratings.  It does well with DVRs and did pretty good for the finale.  Signs point to a second season with work being done on getting the cast back and some writing changes to beef things up a bit – some good signs.

Final Grade B
Posted by SHADOKP at 1:42 PM